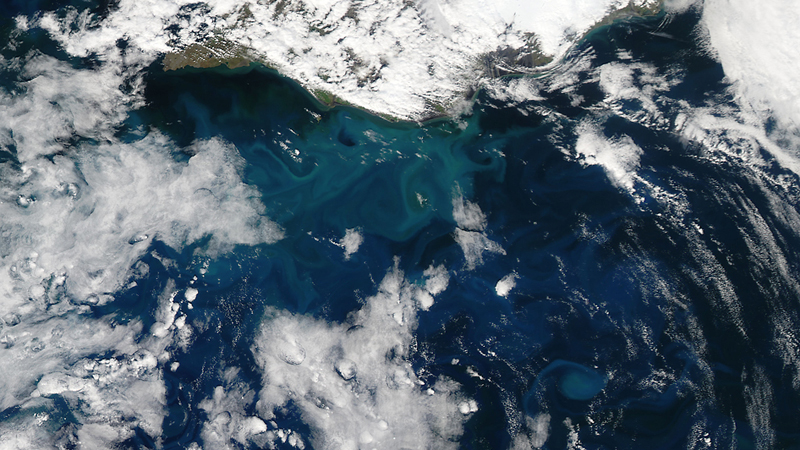 A spring bloom of phytoplankton in the Atlantic Ocean off Iceland captured by NASA in June 2014 (Pic: NASA/Jeff Schmaltz)

Technology’s answer to climate change in a world in which humans go on releasing carbon dioxide in the atmosphere has just had another setback.

The idea of fertilising the planet’s oceans with iron filings to stimulate green growth and turn the oceans into a carbon sink isn’t so simple as hoped.

Two studies – both involving experiments at sea – have confirmed that trace elements such as iron affect plankton growth, and that more iron can mean more carbon dioxide exported to the sea bed in the form of dead and buried life forms.

But new research in Nature Geoscience shows that the story is more complex.

Ian Salter, bioscience researcher at the Alfred Wegener Institute’s Helmholtz Centre for Polar and Marine Research, Germany, and colleagues report that they took a closer look at what happens around the Crozet Islands in the Southern Ocean − basaltic islands that deliver a steady natural supply of iron to the surrounding waters.

But more phytoplankton also meant more little creatures such as foraminifera, which graze on phytoplankton, and then make shells of calcium carbonate − a process that puts carbon dioxide back into the atmosphere.

So added iron might make the phytoplankton grow, but it also soups up the return of carbon dioxide to the atmosphere.

The finding is not conclusive. It doesn’t settle the question of whether the presence of trace iron ultimately assists the removal of more carbon from the atmosphere in the long term.

It also doesn’t answer questions about how things might work in warmer waters, and doesn’t offer a guide to the overall effect of iron deliberately added to waters where the phytoplankton don’t bloom in profusion.

But it does provide a snapshot of science in action, and is yet another reminder that the climate system – and especially the traffic in carbon between rock, water, air and living tissue – is immensely complex, and still puzzling.

And if that wasn’t already clear, new research in the Proceedings of the National Academy of Sciences confirms that there is a lot more to be learned about the role of oceans in climate science.

Researchers report that ocean temperatures have been far more variable over the last 7,000 years than anyone had realised.

Thomas Laepple, a climate scientist at the Alfred Wegener Institute, and Peter Huybers, Professor of Earth and Planetary Sciences at Harvard University, US, combed the climate archives, examined indirect evidence from sediment cores and corals and other sources, and reconstructed sea surface temperatures in a range of different locations over a period of thousands of years.

They could − but only for short periods. The longer the time sequence, the greater the discrepancies. Over timescales of a thousand years, the models underestimated the variations by a factor of 50.

“Fundamentally, there are only two explanations,” Dr Laepple says. “Either the climate archives do not provide reliable temperature data, or the climate models underestimate the variability of the climate. Or both may be true to some extent.”

Neither finding suggests that climate scientists don’t know what they are doing. In fact, quite the reverse: researchers are establishing just what they can be sure about, and what remains uncertain.

Nor does either finding suggest that long-term alarm over the consequences of increasing levels of atmospheric carbon dioxide is based on uncertain science.

Dr Laepple says: “We are in the middle of an experiment we cannot reverse, but which we still don’t understand well enough to make clear statements at the regional level on longer timescales.

“Unfortunately, we will just have to continue with this uncertainty for some time.”