Geoengineering creeps from sci-fi to reality

Scientists, artists and policymakers pondered whether to hack the planet at a meeting in Berlin this week 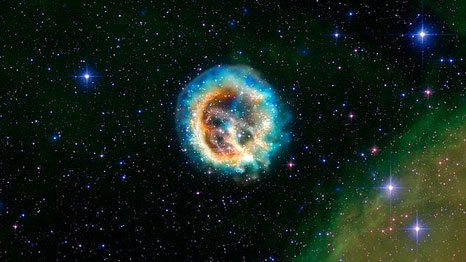 In a world where robots hitchhike across Canada and spacecrafts deliver “cosmic grains” to Earth, there are few ideas left in science fiction which haven’t been rendered just science.

Geoengineering is the exception. Hacking the planet to rewind the damage done by humanity remains one of science’s final frontiers – and one of its biggest taboos.

He is one of around 300 scientists, artists, historians, philosophers and engineers who have congregated in Berlin this week to try to make the geoengineering frontier a little less distant – conceptually, if not practically.

The conference has brought together interested parties to talk about how geoengineering could help reverse the warming that over one hundred years of industrialization has produced.

There are good reasons for all this navel gazing. Geoengineering raises questions not only of science, but of what it means to be human.

“In the same way as we have to consider the deeper meaning of the possibilities presented by genetic modification and cloning, we also need to consider the deeper meaning of what it would imply if humanity ever were to decide to try to take coordinated control over the Earth System on a global scale,” said Mark Lawrence, scientific director at the Institute for Advanced Sustainability Studies, opening the conference.

Another concern is the potential for unintended consequences that would almost inevitably accompany large scale attempts to change the climate of an entire planet. Others worry that it could be seen as a “quick fix” and quell the urgency around deploying traditional mitigation tools, such as renewable energy.

Scientists have tiptoed around the topic, worried that even talking about it could lend legitimacy to those wanting to play God with the planet. But it’s crunch time, says Hugh Hunt, an engineer at the University of Cambridge.

“I want us to make decisions and then proceed. We’ve either got to move forward and do research, or we don’t do research. But we can’t keep talking about maybe doing research,” he tells RTCC.

He tends towards the idea that research should be happening – like chemotherapy, he says, geoengineering could turn out to be a nasty necessity. But funds are low – the UK government is currently spending just over £5 million on geoengineering research.

“What gives us the right to play with our climate? It’s a crazy thing to even be considering doing. But considering how badly we’ve screwed up the climate, then maybe we’ve got to fix it,” he says.

“I’ve been involved the Scouts movement for a long time and the motto is ‘Be prepared’. I think we ought to be prepared.”

The UN’s climate science panel, while stopping short of endorsing geoengineering, did suggest it could be one possible method of dealing with extreme climate change in the future.

“In the face of potential extreme impacts, the ability to quickly offset warming could help limit some of the most extreme climate impacts although deploying these geoengineering systems could create many other risks,” it said.

The Royal Society, one of the most august scientific institutions, also released a report in 2009 that helped to break the taboo around discussing the topic.

But not everyone wants to see geoengineering given the green light, and the Berlin meeting has convened to bring these views together, rather than quietly usher in a new age of exotic experimentation.

Mike Hulme, a professor of climate and culture at King’s College London, wrote in a blog on the conference website, that geoengineering remains an undesirable “fantasy”.

“They offer technologies that will not just compensate for a disturbed global heat balance; they will end up doing far more.  They will inaugurate an era of never ending experimentation with the global sky,” he said.

“In their search for ever more control and adjustment, they will convert the world’s climate – all our climates – into something relentlessly unnatural.”

One of the dangers is the blurred line between experimentation and actual geoengineering.

While the scientists to whom RTCC spoke agreed that no one really wanted to do engineering, and certainly not any time soon, small scale projects to test the waters might be sensible – after all, it remains unclear whether geoengineering is even feasible.

But, says Watson, there is “no bright line – at a large scale, research and deployment blur.

“To do it at full scale you’d have to learn as you went along. Small experiments may have no realistic risk, but they carry indeterminate possible societal risks. Does it open a door for people to do bigger experiments?”

Steve Rayner, the co-director of the Oxford Geoengineering Programme, proposed during the conference a new framework to monitor geoengineering experiments according to a uniform set of principles.

It suggests ideas for regulating this new territory, which could help to banish the image of geoengineering as a perilous no-man’s land. The document had a mixed reception and is unlikely to be universally endorsed any time soon.

But already an alternative has been proposed, suggesting it could only be a matter of time until this eerie realm of planetary meddling becomes chartered, regulated – and, with it, acceptable.

“At the moment there are no rules. It’s because it’s a new field. People are feeling their way around what the rules need to be,” says Hunt.

“Everyone has a gut feel for what is acceptable and what is not. But because it’s all so new everyone’s gut feel is different.”