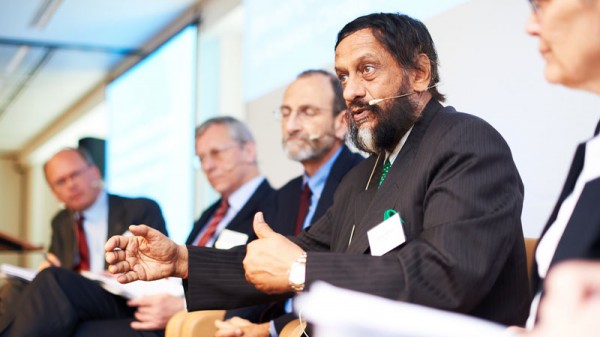 Scientists and delegates from more than 100 governments are meeting in Copenhagen this week to thrash out the definitive round-up of climate science.

By the end of the week, they will have approved the final building block of the UN climate panel’s fifth assessment report – a 100-page document bringing together five reports released over the last six years on the state of the world’s climate.

Rajendra Pachauri, chair of the Intergovernmental Panel on Climate Change since 2002, told delegates this provides the “roadmap” to a climate change deal in Paris next year.

It will guide policymakers as they “find their way to a global agreement to finally reverse course on climate change,” he said.

These reports have been voluntary assembled by 830 scientists. They review the work of over 30,000 scientific papers on climate science, the impacts of warming and how its effects can be avoided.

The synthesis document will be more than just a “cut and paste” of the individual reports, which were released between September 2013 and April 2014, Pachauri said.

“This integrated approach provides fresh insights by highlighting contrasts and making comparisons between findings from all of these source documents.”

The synthesis report is set to launch on 2 November.

It will be used by governments to inform their policy making domestically and internationally, as the world ramps up its efforts to sign off a UN climate deal in Paris next year.

“The synthesis report is the least read of the IPCC reports in scientific circles but the most read report in policy circles,” lead author Piers Forster told RTCC.

While the previous reports dealt with climate change mitigation and adaptation separately, this one will draw links between these fields, he said.

The report will also include an assessment of who is responsible for past climate change and its impacts.

Ahead of this week’s meeting, governments were asked to submit comments on the draft report. The US said that the report should create an “effective story” of what happens if the world fails to act on climate change.

Saudi Arabia, the world’s largest oil exporter, called for the negative economic impacts of curbing fossil fuels to be included in the text.

“The intergovernmental nature of IPCC is essential to its success. It is only thanks to the – sometimes intense, but that’s fine – dialogue between the IPCC authors and governments that our reports can be so policy-relevant,” Jean-Pascal van Ypersele, vice-chair of the IPCC, told RTCC.

“After going through a plenary meeting, the scientific document provided by the authors becomes the essential reference that is used throughout the entire world, because all governments have contributed to its quality.”

Governments have one UN conference left ahead of the Paris finale next year. This will take place in Lima this December. Negotiators laid the political groundwork for this meeting last week at a meeting in Germany, though indecision over key issues means a heavy workload remains.

“The timing is no coincidence – this is being done to be ready for Lima,” said IPCC director of communications Jonathan Lynn of the synthesis report.

Copenhagen, which is hosting the meeting, was the scene of the UN’s disastrous attempt to sign off a climate deal in 2009.

Denmark’s environment minister Rasmus Helveg, who tweeted a photograph of himself cycling to the conference, told the audience: “If we are not paying a small climate bill now we will get a much bigger bill later.”

On Sunday, a geologist and an artist installed a collaborative project in the centre of Copenhagen – 100 tonnes of Greenland ice – to illustrate the impacts of climate change.

The duo, Minik Rosning and Olafur Eliasson, said that the ice was a symbol which they hoped would provide “a physical wake-up call. Climate change is a fact.”