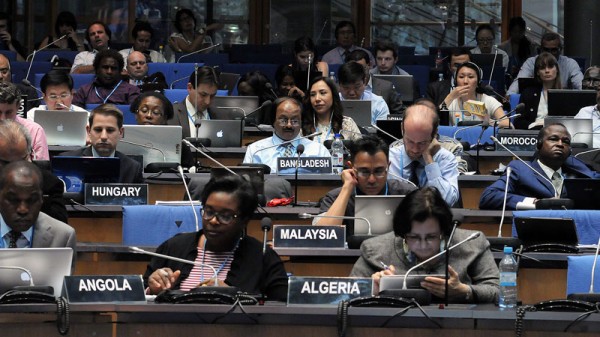 Climate negotiators are set for a heavy workload at December’s summit in Lima, after a week of interim discussions in Bonn returned no conclusions.

Key issues, including the nature of pledges to be made by countries early next year, remain unresolved as negotiators prepare to leave the UN’s climate headquarters in Germany.

But while the main negotiations remained stagnant, negotiators and observers told RTCC informal conversations behind the scenes had put the process on a more positive footing.

“Things are moving, not at the pace we’d like for what needs to be done in Lima, but you can see some people put out things they didn’t put out in the past, trying to find solutions to deadlocks,” said Ronny Jumeau, a negotiator from the Seychelles.

This week’s main task was to determine the information countries should be required to put in their “intended nationally determined contributions” (INDCs).

These national plans, due to be submitted by the end of March 2015, will provide the building blocks for an international deal later in the year.

Observers and some parties had hoped to have an agreement on the form of INDCs by this stage, ahead of the annual conference of parties in Lima this December.

But negotiating groups are at loggerheads over what should be included.

Broadly, developed countries want the plans to focus on mitigation – cutting the greenhouse gas emissions that cause climate change.

Key blocs of developing nations disagree, saying that measures to adapt to the changing climate and provide finance for the green transition should also be included.

US negotiators warned that including adaptation in their INDC could delay submission.

The co-chairs of the meeting, Kishan Kumarsingh and Artur Runge-Metzger, have today released a new text taking into account the views offered by parties during the talks this week, which can then be negotiated in Lima.

It includes all options, including adaptation and finance, as well as the possibility of voluntary mitigation commitments from developing countries.

“We could be going much faster and it will be a big challenge in Lima to wrap things up,” one EU negotiator told RTCC.

But it had been a useful meeting, he insisted. “We’re not in a stalemate.”

At a stock-take of the meeting held on Thursday, a negotiator for Egypt, speaking on behalf of the like minded developing country bloc, said it was time for negotiations to begin in earnest.

“The time for conceptual, brainstorming-type discussions is over,” said Egypt’s negotiator.

“Action now is what is needed. Through such negotiations, we can narrow differences, find convergence, and arrive at a collectively constructed consensus in Lima, first on the elements and then on the information and workstream 2 [pre-2020 action].”

His remarks reflected a wider frustration among some parties in the limited progress this week, as the Lima deadline looms.

There are now three papers on the table for discussion, but this week they were still being discussed in general terms, rather than the line-by-line analysis that shows parties are nearing a deal.

But despite countries sticking to positions publicly, behind the scenes there have been more attempts at flexibility, negotiators said.

“I think people are reaching out to each other, feeling how far they’re prepared to go,” said the Seychelles’ Jumeau, although he added that strident tones could make a comeback when it comes to preparing a final text.

While there was little in the way of formal outcomes from this week’s meeting, several new ideas emerged.

Brazil, traditionally keen for developed countries to pay for their historical responsibility for climate change, suggested a way to dismantle the old division between rich and poor countries.

This division is embedded in the original 1992 convention which guides the discussions.

It has become contentious as many countries argue the world has changed dramatically over the last two decades. Others say that no recent changes undo the historical responsibility that the US and the EU, for instance, bear for climate change.

US negotiator Todd Stern has made clear he will reject any deal based on the old binary approach.

There have been some developments outside the talks that have influenced the negotiations.

Today, European leaders signed off a 2030 climate package, committing the EU to reduce its greenhouse gas emissions by “at least” 40%.

“The European Union has sent a positive signal to the world, showing that it is still serious about tackling climate change,” said Jennifer Morgan, head of the climate division at the World Resources Institute.

The inclusion of “at least” provides a positive model for the international discussions, said the EU negotiator in Bonn, as it indicates targets are a benchmark which can be improved at a later stage.

Such flexibility could be important, considering recent comments from Todd Stern, the US special envoy on climate change.

In a speech at Yale last week, he said that the US would support non-legally binding targets, so that countries aren’t afraid to pledge high.

This approach has been supported by New Zealand, Canada and Australia.

Jumeau said that his small island states bloc was willing to discuss the idea, but it wouldn’t be “rattled” by the big players.

“The days when big powers would say something and have the whole world running around like a headless chicken are over,” he said.

“Now, it’s more of a dialogue, a conversation.”