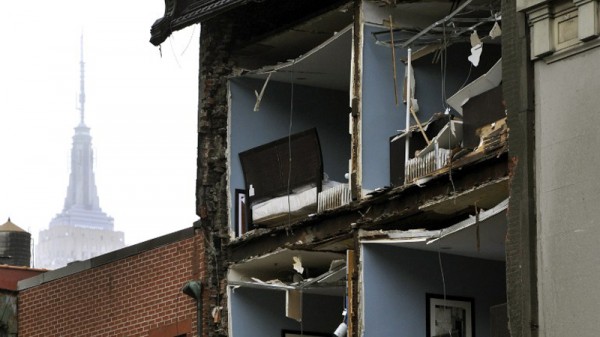 A New York building after Hurricane Sandy. The US wants to stress climate change is not just a threat to poor countries
(Pic: Flickr/Diariocritico de Venezuela)

Over 2,000 comments on the UN’s flagship climate science report have been submitted ahead of a week of negotiations that will determine the final text in Copenhagen.

A 181-page review of the draft seen by RTCC is packed with amendments government officials believe are necessary before it is approved for publication.

The UK wants the Intergovernmental Panel on Climate Change (IPCC) study to focus more the “risks of delaying action” as well as the “co-benefits of action”.

US comments say the study should stress how richer countries could be affected by future extreme weather events. “There are very few references to the vulnerability of wealthier countries to climate change,” they write.

The US also says the final IPCC synthesis report, which pulls together three 1,000+ page studies released in the past 12 months, needs to be more accessible to readers without deep technical knowledge of climate issues.

“This document should be prepared so as to be effective for the people who will only read the gray boxes. This report is a story, of what happens if we don’t act, and what can happen if we do… it should be an effective story.”

The leaked draft seen by RTCC warns that continued emissions of greenhouse gases will lead to “severe, pervasive and irreversible impacts for people and ecosystems”.

Sea levels will continue to rise due to melting icecaps and glaciers, and the oceans will become more acidic, it says.

But there is a chance to avoid the worst impacts, says the IPCC, if “substantial near-term emissions reductions” are delivered, which would “reduce the costs and challenges of mitigation”.

The EU calls for the report to be more specific and offer advice to “help guide policy makers”, while Sweden suggests scientists include a line explaining how unusual current rises in carbon dioxide are.

“Perhaps it can be described somewhere that we as humans have not experienced these kind of CO2 levels before. We are thus in the middle of an experiment. It is therefore possible that surprises can occur. There can be risks that we have not yet identified,” it says.

Saudi Arabia, which has a history of trying to downplay potential impacts of climate change, says the report should reflect a recorded slowdown in temperature rise since 1998.

The world’s largest oil exporter also calls for negative effects of curbing fossil fuel use, including the devaluation of its assets, to be mentioned in the final text.

Not all comments are political. “I have zoomed 150% in the pdf and have a huge monitor. The [Figure SPM 4] figure has a low resolution which makes it hard to read on paper,” a Danish official writes.

While the contents of all three IPCC studies have been available since the last was released in April, the synthesis is seen as politically sensitive.

It comes just under a month before the UN’s annual climate summit, which will be held in Lima, Peru.

“The main point is to make the key findings clearer and frame them in ways that make them easier for politicians, policy makers and the public to understand,” says Michael Jacobs, a former climate advisor to UK prime minister Gordon Brown.

“A lot of doubts about climate change that sceptics have tried to raise have pretty much been quelled – they have turned attention to the policy not science – which is a consequence of these three reports.”

Leo Hickman, WWF-UK’s chief climate change adviser, who will be in Copenhagen as an observer, tells RTCC the synthesis will likely be the “go-to document” governments use when seeking evidence for their climate and energy policies.

“This latest IPCC synthesis report is likely to show a clear fork in the road ahead to policymakers,” he says. “We now have to ensure our representatives choose the right route: one that guarantees a safe, stable climate in the decades ahead and leaves the era of fossil fuels behind us.”

Over 500 people are expected to attend the IPCC synthesis review in Denmark, with 270 national officials from 120 countries taking part in the discussions.

IPCC chair Rajendra Pachauri is in charge of the meeting. Delegates will review every line of the summary for policymakers and analyse all 100 pages of the synthesis report.

In a sign of the importance the UN places on this study, secretary general Ban Ki-moon is to attend a press conference on Sunday 2 November where the synthesis will be released.

“The timing is no coincidence – this is being done to be ready for Lima,” says IPCC director of communications Jonathan Lynn.