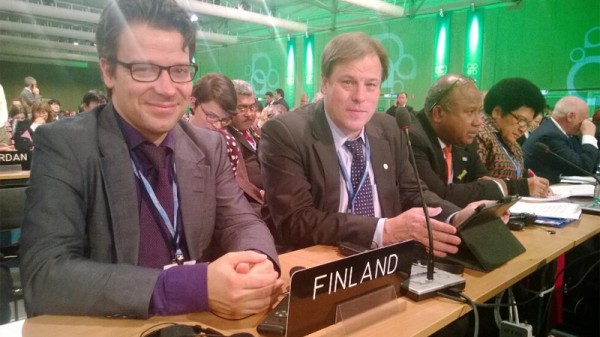 Europe has to work harder to convince Poland’s leadership it can ditch coal and boost economic growth.

That’s the view of Ville Niinisto, Finland’s former environment minister who was, until September 26 when his Green Party left government, closely involved in talks on the EU’s climate and energy package.

He says EU heads of state need to focus on a package that will steer Poland away from coal, which provides over 90% of its electricity, but offer it assurances it will not be left at the mercy of Moscow if it switches to gas and renewables.

“It has been clear that to get the Polish on board they need to see national policy options for creating new national sources of energy that are not coal and to ensure they are not dependent on Russia,” he tells RTCC.

“The more elements of solidarity in this package or some separate deal – that will help Poland in this regard. I think the Polish can be got on board in a relatively acceptable deal – but it’s not easy.”

Niinisto was speaking on Thursday morning, hours before a new set of proposals from the European Council was released, based on overnight talks.

These indicate broad support for a goal of “at least” 40% greenhouse gas reductions, as well as renewable and efficiency targets that will not be binding on member states.

It’s unclear what level of support this document enjoys, but a Finnish official closely involved in the talks told RTCC on Thursday that negotiations with Poland were ongoing.

Poland’s opposition to tougher climate goals is nothing new.

For most of Niinisto’s time in office his counterpart in Warsaw Marcin Korolec, now climate minister, argued against the EU making tougher cuts, saying heavy industry would leave the region.

Some EU negotiators complain Poland’s aggressive stance, as represented by Korolec, has undermined Brussels’ reputation as a climate leader.

Niinisto says the Polish minister is merely fighting his corner, reflecting a national debate that is heavily weighted in favour of coal and in thrall to a strong coal-mining lobby.

“I personally had a good relationship with minister Korolec and negotiated the EU deal with him in Doha. The Polish want to be on board but they have a domestic audience.

“For that domestic audience the government has to be able to show they can create more jobs and more growth by investing in these smarter renewables than they have today.

“I think there is a pathway to that and Korolec is open to that, but we have to make sure the rest of the Polish government is on board and they can get the domestic discussion into the right direction.

But Niinisto, whose Finnish Green Party left the Helsinki government when it made a decision to invest in nuclear energy, says if the EU ends up giving Poland more money from its “solidarity fund”, it should specify where at least some of it goes.

A report by Greenpeace, CAN Europe and WWF found Poland had spent 82% of new energy investments listed in its national plan on fossil fuel capacity, 10% on its national grid and only 8% on renewables.

“I think we can quite clearly demand the Polish invest in combined heat and power, biomass solutions where they can replace coal,” says Niinisto.

“They have a strong network of district heating which can be made more environmentally friendly than it is today.”

Niinisto says a goal of “at least” 40% carbon cuts, with provision for 50% should the UN strike a global climate deal next year, must lie at the heart of the EU 2030 package.

But he says the bloc should be able to show some flexibility over efficiency and renewable targets, which are currently set at 20% for 2020, like the GHG goal.

The UK has argued strongly against binding targets – citing its plans to increase nuclear’s share of its low carbon mix as one reason why a renewable energy goal of 27% could backfire.

The latest set of draft proposals appear to offer a solution, suggesting an EU target of at least 27% for the share of renewable energy consumed in the region “be binding at EU level.”

Niinisto says this goal “should be higher”, but suggests an overall target could be feasible, under certain circumstances.

“My understanding is that there has to be a clear bindingness in the EU-level target and some mechanisms which show that this is nationally implemented, in order to accept only an EU-level target,” says Niinisto.

Despite fears a spat between France and Spain could sink plans to boost EU-wide electricity connections Niinisto says he is “personally quite positive”, pointing to research demonstrating that smart grids save money and are more effective.

But he is concerned that short-term economic or political issues could divert leaders from agreeing on what he believes is a strategically vital package, both to ensure energy security and to drive economic growth.

“My worry is are the EU leaders strong enough looking forward 10-20 years when it comes to sustainable growth and solving environmental and ecological problems. Or do they think about their narrow concerns about next month domestically?”

Once the leaders are in position Niinisto expects Germany, France and Britain to lead discussions, but indicates the balance of power within EU meetings is shifting away from the traditional triumvirate.

“A lot of the medium-sized progressive countries like Denmark, Sweden and Finland can play a major role in finding a compromise that is good enough for the climate and the economy,” he says.

“In eastern Europe I think the more we can isolate the Polish worries by allowing Poland to come out of their corner the better deal we will get. The Poles don’t like to be pushed into a corner, but we can’t allow them to have buddies in the corner either.

“A positive side has been countries like Estonia, Baltic states and Romania have been more positive to climate ambition than previously. I think there are a number of eastern European countries who realise this is the way for them to modernise their economy as well.”