Leaders in Washington, Beijing and Pacific Islands will be watching Brussels carefully this week 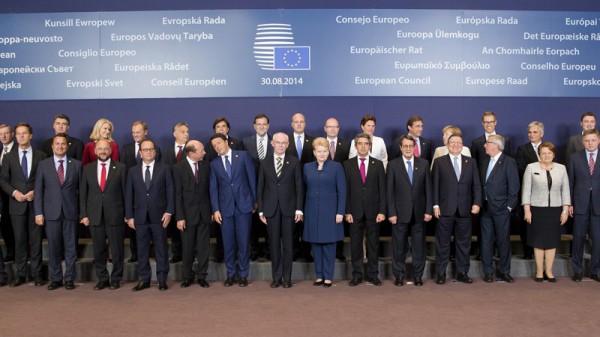 It has no army, a tottering currency, little sense of identity and a parliament that frequently seems on the verge of anarchy.

But when it comes to climate and energy policy, these 28 states, crammed into 2% of the Earth’s surface, pack a punch.

By the end of this week European leaders meeting in Brussels will – unwittingly or otherwise – have helped determine whether UN efforts to secure a global climate treaty will be a success.

An agreement that sees them commit to carbon cuts of beyond 40% will be seen as a positive step towards Paris, where that deal is set to be signed off in December 2015.

Anything less, or any caveats, sends a message that a bloc that used to set the pace of carbon cuts has chosen a more cautious policy.

“Whatever the EU decides will set the tone for all the developed countries to deliver on climate action,” says Andres Pirazzoli, a Chilean climate envoy, speaking from UN climate negotiations in Bonn.

Countries at imminent risk from climate impacts are even more concerned about what Brussels could do.

Ruel Yamuna represents Papua New Guinea at UN talks. “Leadership is expected, it’ll be really interesting to see how that unfolds,” he says.

Quamrul Choudhury, lead negotiator for Bangladesh and a representative of the least developed countries group agrees: “It’s a big deal. If EU takes a lead and raises ambition then reaching a deal in Paris is easy.”

A region that enriched itself on African resources in past centuries owes it to the people it has exploited to make every effort to avoid dangerous levels of warming, he said.

But why does a group that usually makes headlines for its bloated bureaucracy and bickering heads of state matter so much?

As a result, decisions taken in Brussels relating to appliance and efficiency standards resonate around the world.

It’s also home to the world’s largest carbon market, albeit one hobbled by low prices and vast amounts of free allowances hoarded by heavy polluters.

EU experts helped China set up its seven pilot carbon trading zones and could eventually link up with them, which would be a huge step towards a global carbon price.

And while it’s no longer the largest market for renewables, strong support for a long-term low carbon trajectory from the EU’s 28 member states will add confidence to global clean energy markets, say analysts.

“The EU can send an important signal on renewable energy… what we have seen over the last decade is that the technology has taken off,” says Antony Froggatt, a senior research fellow at Chatham House.

A letter sent to the Financial Times on Wednesday by a trio of leading economists, Thomas Piketty, Claudia Kemfert and Cameron Hepburn makes a similar point.

“Major companies, smart investors and a new generation of entrepreneurs are already demonstrating how markets can drive low-carbon growth. It is already happening, but Europe is now no longer in the lead,” they wrote.

Europe also has a history of leadership at UN climate talks.

In 2011, it allied with small island states and African countries to compel the US, China and India to accept that a UN agreement with some legal force would be needed to address global warming.

But what is now abundantly clear is that EU carbon cuts alone won’t be enough to stop climate change.

Europe is the world’s third largest greenhouse gas emitter, releasing just under 4 billion tonnes of CO2 in 2012, a figure that has steadily declined since 1990.

The US released 5 billion tonnes of CO2 in 2012, while China rocketed to 10 billion on a trajectory that shows little signs of slowing.

Data released this year indicates global emissions could rise 2.5% in 2015, with India set to be a major contributor. 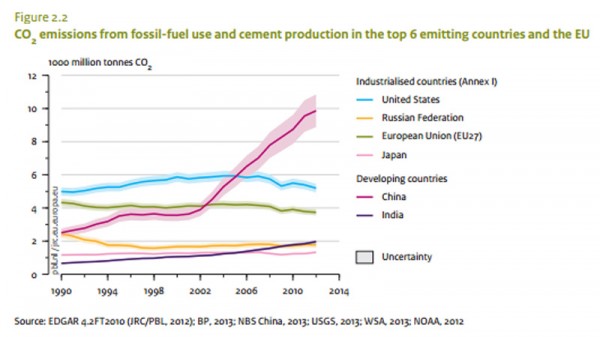 Some analysts suggest the significance of the EU’s 2030 climate and energy package could lie less in its own absolute cuts and more in its relationships with China and the US.

“Renewed climate leadership could help to leverage greater ambition on the part of other major economies like China and make reaching an international emissions agreement at next year’s important UN summit in Paris more likely,” argues Joss Garman, an associate fellow at the IPPR think tank in London.

According to an official at the UK’s Department of Energy and Climate Change, phone lines from Beijing and Washington to London have been heating up over the past months.

They want to know what level of carbon cuts the EU is likely to pitch for, as it directly impacts on their own planning. “We do know they will benchmark against us,” said the official.

What makes the next few days interesting is that the EU is an outlier among the big emitters.

It’s revealing what it will target in 2030 months nearly six months before the US and China, a fact that former White House staffer Pete Ogden tweets means Washington will sit up and take note.

@rtcc_edking @QuamrulChow2030 @cscaldera @YebSano Yes, esp as they look to be first set of major economies to make formal pledge.

That doesn’t mean Barack Obama will be sitting in the Oval Office with a calculator come Friday, working out how he can boost the current US carbon cutting pledge of 17% on 2005 levels by 2020.

But his staff will be keeping tabs on what will be the first salvo on the road to Paris.

“I’ve had enough conversations with them to know they don’t peg their targets to the Europeans but it clearly is a marker out there that they know others will judge their target against.”

Back at the UN working groups in Bonn, the EU’s impending decision hangs over everything.

With the glow from Ban Ki-moon’s New York climate meet apparently extinguished, divisions between developed and developing countries over climate action seem as raw as ever.

A UN official warned delegates that their dogmatic positions could wreck the week’s planned negotiations.

The predictable rhetoric from both sides comes from a lack of trust that anyone will move first, built, it has to be said, on years of empty promises.

But as Chilean negotiator Pirazzoli observes, all that could change with a strong message from Brussels.

And with the UN’s final climate summit of the year looming at the end of November, the process needs all the help it can get.

“Those discussions are very important because they give us a sense of reality,” he says.

“They give us a sense of what pragmatically one can expect from traditionally the most ambitious group in the negotiations.”