Coal is expensive when subsidies and climate change costs are factored in, shows European Commission analysis 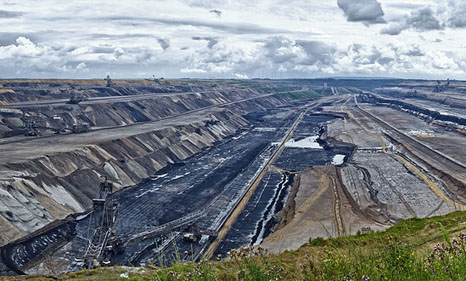 Germany spent €3 billion on supporting coal in 2012, more than any other EU country.

Across the EU, coal power generation got €10 billion, the same amount stumped up to support onshore wind.

These figures come in an Ecofys analysis for the European Commission that shows coal is more expensive than many renewable sources when you factor in external costs such as climate change.

Presenting the findings, energy commissioner Gunther Oettinger said: “We now have a set of data on subsidies and costs in the field of energy that is more solid and comprehensive than anyone before.” 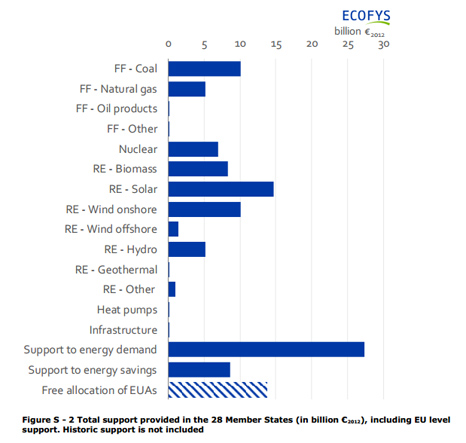 Support for different energy sources across the EU in 2012
(Source: European Commission)

The report’s publication comes after the German government admitted it could not phase out coal and nuclear from its power mix at the same time.

“For a country like Germany with a strong industrial base, exiting nuclear and coal-fired power generation at the same time would not be possible,” a spokesperson told Reuters.

A much-hyped renewables boom has met some of the demand gap left by nuclear’s exit.

But Germany has also resorted to mining and burning more lignite, a particularly polluting form of coal.

The latest subsidy report shows keeping on coal is an expensive strategy for Germany’s coffers as well as the climate. 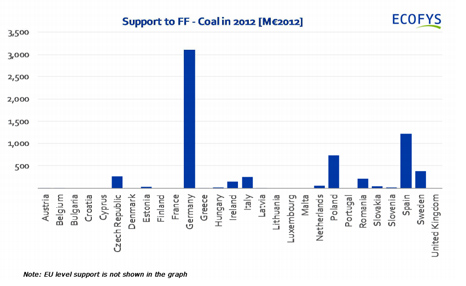 Germany is the biggest supporter of coal in Europe
(Source: European Commission)

Ecofys estimated the external costs of each fuel source, including climate change, health and other environmental costs.

Climate change was the most significant of these, assuming a carbon cost of €50/tonne.

That is far higher than the €6/t levied on the EU carbon market, but consistent with internal carbon prices used by some big businesses in their decision making.

In 2012, these external costs totalled between €150 billion and €310 billion across all energy sectors.

Coal prices have plummeted in the last three years, making it seem an attractive option for power generation.

But when subsidies and external costs are factored in, Ecofys estimates coal costs €162-€233 per megawatt hour, a standard unit of electricity.

Offshore wind and solar are comparable, at €186/MWh and €217/MWh respectively.

Under this analysis, onshore wind is a relative bargain at €105/MWh.

REPORT: World of clean energy is possible by 2050

“Renewables are regularly denigrated for being too expensive and a drain on the taxpayer.

“Not only does the commission’s report show the alarming cost of coal but it also presents onshore wind as both cheaper and more environmentally-friendly.”

He added that wind technology could get cheaper, while coal was fully mature and unlikely to reduce costs.

The figures come as Europe prepares to set the course of energy and climate policy for next decade.

National leaders are due to finalise the EU 2030 climate and energy framework at a European Council meeting on 23 and 24 October.

The draft proposals include targets to cut greenhouse gas emissions 40%, improve energy efficiency 30% and get 27% of energy from renewable resources.

NGOs have warned that loopholes in the package could weaken the deal and allow back-door subsidy for new coal plants in Poland.

If the EU doesn’t get a grip on coal, a major contributor to emissions, they say it could diminish the bloc’s credibility in international talks.

Danish foreign minister Martin Lidegaard told RTCC there were still disagreements between member states over the level of ambition.

Speaking as he toured European countries in an attempt to build consensus, Lidegaard said there is “still a long way to go”.