Star of UN climate summit says support in New York left her stunned, and determined to save country from rising sea levels 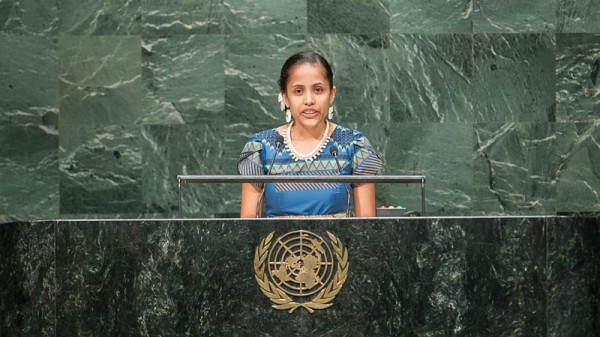 In September, 26-year-old Kathy Jetnil-Kijiner took to a New York stage to recite a poem about her daughter and the sea.

This particular stage has a habit of hosting historic scenes, from Fidel Castro’s four-hour speeches, to bouts of shoe-banging by Nikita Khrushchev. Minutes earlier, it had been occupied by Leonardo DiCaprio and Al Gore.

But for her own five minutes at the podium of the United Nations General Assembly, Jetnil-Kijiner wanted to talk about the Marshall Islands.

The world leaders whom Jetnil-Kijiner addressed at the UN Climate Summit were presumably well-versed enough in world geography to know what she was talking about, but many people have never heard of the tiny islands.

“Show them where it is on a map,” she writes in an old poem, addressed to her American friends. Yet these islands are her home – and now the home of her seven-month-old daughter, Matafele Peinem.

In photographs, the Marshalls look magical. Each of the 24 coral reef islands encloses a lagoon, where sailors moor fishing boats and canoes.

But their future is cloudy. “Men say that one day / that lagoon will devour you,” recited Jetnil-Kijiner at the summit. “They say it will gnaw at the shoreline / chew at the roots of your breadfruit trees / gulp down rows of your seawalls / and crunch your island’s shattered bones”.

The sea is rising

Jetnil-Kijiner speaks to RTCC in the midst of the clean-up effort. Families have had to take time off from work to repair their houses and get rid of the debris choked up by the sea, she says. Her little girl – to whom her poem was addressed – gurgles and sneezes in the background.

Life in the Marshall Islands moves to the rhythm of the Pacific Ocean. Lying just two metres on average above sea level, they are extremely vulnerable to the rising sea level caused by climate change.

Even so, says Jetnil-Kijiner, there should never have been this much damage in October. King tide season, when the water is the highest, is not due till March.

“I’ve talked to my parents, to the elders in my community, and they all say the same thing: they’ve never seen it happen this frequently and this badly,” she recounts.

Everyone on the islands believes that climate change is to blame, she says. Higher sea levels mean that, when the tides come in, they are invading more of the shorelines. Even the dead are affected: spring tides in April washed the World War II skeletons of 26 Japanese soldiers from their graves on the isle of Santo.

Scientists have also sounded the alarm. The IPCC warned in its most recent report that up to 15% of small islands could be wiped out by a sea level rise of one metre. In parts of the Pacific, the ocean is rising by up to 12mm a year – four times faster than the global average – according to the UN Environment Programme.

The UN chose Jetnil-Kijiner to perform based on one of her previous poems, ‘Tell them about climate change in the Marshall Islands’. Here, she tells her American friends to spread the message of the Marshall Islands, how “we don’t want to leave / we’ve never wanted to leave” – now a real prospect for the vulnerable islanders.

She thought this was the poem she would read at the summit, but the UN had other ideas, asking her to write something new – and memorise it – two weeks ahead of the big day.

Her poem, they told her, should speak not just for the Marshall Islands, not just the Pacific, but for the whole of civil society. “That’s the entire world,” she muses – one Marshallese voice for seven billion people.

She had only recently given birth to her first daughter, Matafele Peinem. She remembers she thought at the time: “I don’t know how to write on behalf of the entire world, but I can write to my daughter, so why don’t I just do that?”

This is how one mother’s concern for her “seven month old sunrise of gummy smiles” ended up moving the world’s leading dignitaries to tears. It was a show of empathy that no news report or statistic on the fate of the Marshall Islands – or Bangladesh, or Gambia, or the Arctic – has managed to evoke.

“A lot of time people brush off art as something that’s not really necessary, especially in these conversations regarding politics and science, but I think art is important,” says Jetnil-Kijiner. “It touches your humanity.”

Tears dry quickly. During the summit – feted as the most important climate gathering since Copenhagen – there was a smattering of financial pledges, warm words of solidarity, and a large amount of bluster.

It was certainly not enough to secure Matafele Peinem a future on the same land where her mother writes poetry, where her grandmother became the first islander with a PhD, and where her ancestors before her fished and chanted. 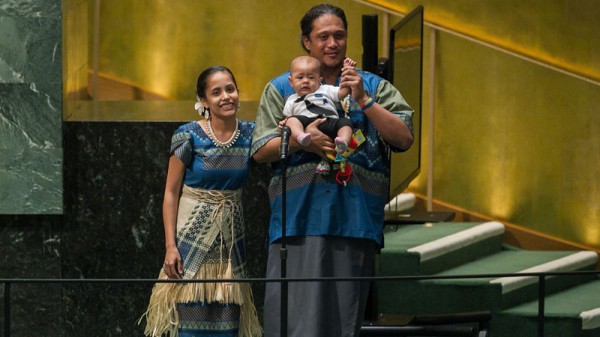 World leaders will meet again in Paris next year, where they have agreed to sign off a deal that will prevent dangerous global warming. So far, efforts have been shaky.

“It concerns me: how effective am I at the end of the day?” wonders Jetnil-Kijiner. “And I don’t know how effective I am, but it’s important to keep moving forward, to keep pushing forward, even if it seems as though we’ve been doing this for so long and we’re so weary.

“I think the value of investing in our youth is the fact that they can pick up the torch when our elders have grown weary from the fight, and they can keep continuing that fight.”

But when she said in her poem that “no one’s drowning”, the pathos was clear. Already, people have started to move away from the islands of the Pacific.

In her poem, she referred to Taro Island in the Solomons, which is preparing to relocate entirely as rising sea levels and tsunamis make life there impossible. She apologised to the Carteret islanders of Papua New Guinea, whose 40 families became the first community to officially relocate because of climate change in 2009.

And she worries that poetry might end up a medium to preserve the memory of a land already lost.

At the University of Hawaii, she studied a masters in old Marshallese chanting and storytelling, spending the summer of 2013 interviewing the elders of the island about their traditions.

Like these chants, which she says connect her to the islands’ pre-colonial past, the words of the poets could one day be the only way for her descendants to connect with a land that has sunk beneath the waves.

Jetnil-Kijiner knows the problem is urgent – but having a daughter has made it more so. “Holding her and looking her, and seeing how vulnerable she is reminded me of how vulnerable we are,” she says.

But she also knows that there are people on her side. She understood this for the first time when researching the global climate movement for her poem, she says.

Separated by thousands of miles from Washington, London and Beijing, she says she had no idea of the scale of activity taking place, not just to apply political pressure, but also to drive action at a grassroots level.

“I thought we were alone,” she says. “I was moved that there are so many people around the world trying to do so much to create change. It made me want to speak to that movement and encourage it.”

Pacific islanders are leading the way. In October, 30 ‘Pacific Warriors’ sailed in handmade canoes to the world’s largest coal port in Australia, where they attempted to block ships from entering and leaving the terminal. 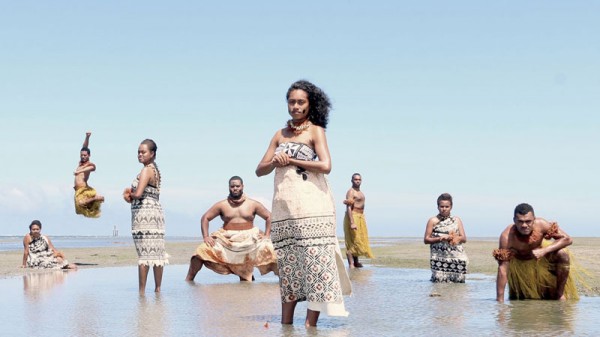 And the weekend before Jetnil-Kijiner addressed world leaders in New York, half a million people took to the streets in cities and villages across the world in the largest ever climate march.

The Marshall Islands may be specks in the ocean. Their tiny green squiggles will always be hard to find on a map.

But that will be no absolution if they must be inked over with blue.