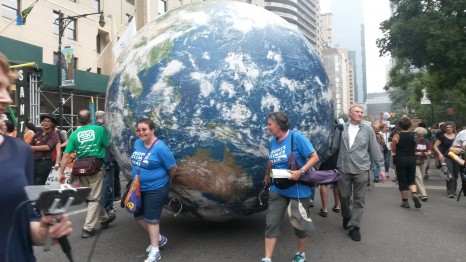 Organisers of Sunday’s climate change march in New York said they were “overwhelmed”, with three times as many people turning up as expected.

The two-mile route was packed with campaigners from all corners of the globe, with Peruvian villagers walking alongside Hollywood celebrities and international ministers of state.

Held two days before a UN climate summit at its headquarters alongside the Hudson river, the march – part of a global relay of protests – was designed to show world leaders the level of public support for tough action to stop global warming.

Veteran activist Bill McKibben, co-founder of march organisers 350, said the news that 310,000 people had turned up had left him “stunned”.

“This is way more people than we anticipated – this is the largest political gathering about anything in our country in many years, and I think it’s the moment that peoples frustration has boiled over,” he told RTCC.

“Movements need to keep growing. This one is growing exponentially.”

In stifling heat and under grey skies, marchers set off at 1130 from Columbus Circle, on the edge of New York’s Central Park.

Swinging past the Trump Tower, owned by vocal climate sceptic businessman Donald Trump, they edged along the park before heading into downtown Manhattan towards Times Square.

Speaking just before she joined the parade, a visibly emotional Christiana Figueres, the UN’s lead climate official, said the level of support was evidence in her mind that a global agreement now enjoyed widespread support among the public, private sector and governments.

“I think this march is a good example that the context in which a climate change agreement has been negotiated has substantially changed, irrevocably changed,” she told RTCC.

“This is an unprecedented global mobilisation of support not just for an agreement, but for an ambitious agreement.”

Figueres is tasked with ensuring that the current set of international climate negotiations conclude in 2015 with a deal to ensure warming does not tip over 2C, a level deemed unsafe.

On Sunday a group of scientists funded by the Australian, Norwegian and Japanese governments said the world had 30 years before dangerous impacts were locked in for good.

They also revealed China – which is not sending its head of state to the UN meeting – now annually emits more carbon dioxide than the US and EU combined.

Ban described himself as “overwhelmed” by the noise and energy of the marchers, adding pointedly: “I hope this voice will be truly reflected to the leaders when they meet.”

Over 120 leaders have confirmed they will attend his one-day summit, which is being billed as a venue to announce future climate initiatives, discuss ways to help poorer countries access finance and hear how the business community can help.

Another of Ban’s climate envoys, former Ireland president Mary Robinson, said she felt leaders had “learned the lessons” of the 2009 climate summit in Copenhagen, which ended in acrimony and failed to slow emissions levels.

She told RTCC: “This time the climate summit is 15 months before decision time, and there are a lot of steps to be taken, but we need mobilisation so leaders understand this is not business as usual with a little bit of green.”

In 2012 Superstorm Sandy made landfall and left parts of Manhattan underwater, flooding the subway and closing most road tunnels, an experience he said had influenced the way local people see green laws.

“This changes what people demand both from corporate America and leaders,” he told RTCC.

While campaigners were still singing, dancing and banging drums, intensive negotiations ahead of Tuesday had already started across the city.

Representatives from the Marshall Islands, which are acutely vulnerable to rising sea levels, joined the world’s 17 biggest emitters in a meeting of the Major Economies Forum, a US-led initiative which covers 80% of global emissions.

US secretary of state John Kerry used the meeting to deliver strong message on global climate ambition, stressing that all countries now had the tools to tackle what previously appeared an unsolvable conundrum.

“Unlike many of the challenges we face when it comes to climate change we know exactly what it takes to get the job done,” he told reporters.

Kerry’s boss Barack Obama is expected to use Tuesday’s meeting as a chance to showcase the country’s new climate legislation, and call for greater cooperation on issues such as HFCs, a set of potent climate warming gases used in refrigeration.