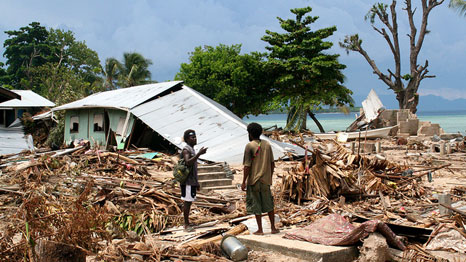 A small community in the Solomon Islands is preparing to relocate entirely to a neighbouring island, as the pressures of climate change threaten to overwhelm the town and its inhabitants.

Taro Island, the capital of the Solomon’s Choiseul province, is home to around 500 people and lies less than two metres above sea level.

The pressures of climate change on the coastal community are now so severe that plans are now underway to relocate the entire town and its facilities to the mainland.

Town planners, engineers and academics have joined forces to create a blueprint for the new settlement.

“Relocation is the only option available that will keep the community safe and will allow for future growth and prosperity of the capital and the province,” said Philip Haines, project manager at BMT, an engineering consultancy that is working on the plan.

The Solomon Islands, along with other small island nations in the Pacific, are among the most vulnerable to climate change. Since 1993, the sea level around the islands has been rising by about 8mm every year – three times faster than the global average.

A tsunami which hit the Solomon Islands in 2007 caused disruption to almost a quarter of the 90,000 population, and killed over 50 people.

Following the disaster, Choiseul Province Premier Jackson Kiloe called for more government funds to be poured into relocating the capital. “We have just witnessed how vulnerable Taro is to natural disasters,” he said.

The Solomon Islands government granted $3 million to the Choiseul province in 2008 to facilitate the project, allowing a 488 hectare plot of land on the mainland Choiseul Bay to be purchased for the settlement.

The Australian government is funding the design of the new town through a A$32 million project initiated with help from the UN’s fast start finance programme.

Many of the low-lying nations of the Pacific face the prospect of mass migration if sea levels continue to rise at current rates, but this is the first time that a provincial capital will be totally relocated.

Project planners have consulted with local communities to design a new town that is sensitive to their needs.

They have also drawn up interim adaptation measures, such as a tsunami response plan, since complete relocation will take many decades to carry out, during which climate impacts are projected to intensify.