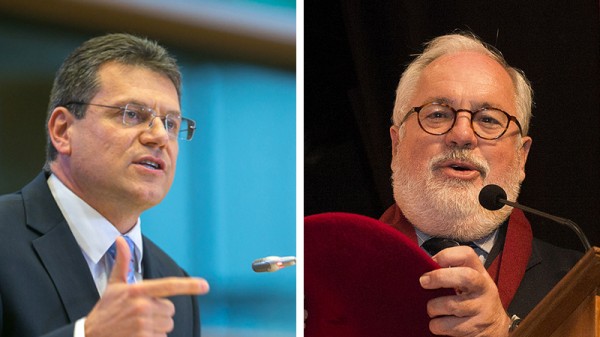 Maros Sefcovic and Miguel Arias Canete will lead European Union’s energy and climate change policy for the next five years, it was confirmed on Wednesday.

After forcing two substitutions to the line-up, the European Parliament approved 28 new commissioners on schedule. They take their posts on 1 November.

Slovakian nominee Sefcovic will be vice president of “energy union”, a role created in response to the Ukraine crisis. Spain’s Canete becomes commissioner for energy and climate action.

Jean-Claude Juncker, president of the European Commission, said a series of hearings had shown “broad consensus” around his choices.

But MEPs had “expressed some concerns”, which he promised to swiftly address.

These included rejecting Juncker’s first choice for energy union, Alenka Bratusek. She was criticised for giving vague answers in her hearing.

Greens also raised concerns about Canete’s links to oil companies, saying these conflicted with his role to promote climate action.

But after some political horse trading, Canete’s appointment was approved.

Sefcovic and Canete join at a critical time for climate negotiations.

Heads of EU member states are due to sign off a contentious package energy and climate change targets for 2030 in the next two days.

That sets the bar for other countries in international climate talks, which are heading for a deal in Paris next year.

Sefcovic will attend the Paris talks, he said in his hearing on Monday, describing it as “the foreign policy event of the year”.