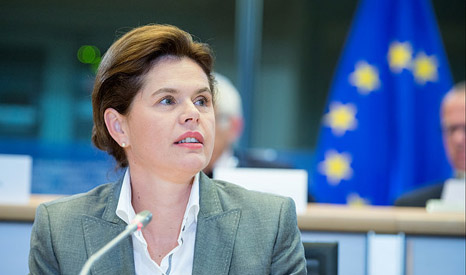 The former Slovenia prime minister was ousted by 112 votes to 13, after failing to impress at a parliamentary hearing on Monday.

European Commission president-elect Jean-Claude Juncker said he would wait until the votes were in for all 27 of his nominees before commenting on who might replace Bratusek.

Yesterday, rumours circulated that Bratusek had withdrawn, which she denied, blaming her countrymen for turning against her.

This piece of paper has just been found in the #EP. #Bratusek -the first victim at #EPhearings2014 of #TeamJunckerEU pic.twitter.com/ku8lXAS0ti

On whether Canete was suitable for a role in the European Commission, 83 MEPs said yes, 42 said no and three abstained.

A further six MEPs opposed his appointment for the climate change brief, but it was not enough to block the Spanish nominee.

More than half a million people had signed an Avaaz petition to keep “petrolhead” Canete out over his ties to two oil companies.

But on Tuesday night, a legal affairs committee ruled there was no conflict of interest between Canete’s oil links and the commissioner role.

Accepting this, the socialist group of MEPs dropped their opposition to the appointment.

In the trade, they got climate action and sustainability added to the list of first vice president Frans Timmermans’ list of responsibilities.

For Potocnik, it would be a fourth term as commissioner.

Brussels-based blogger Mark Johnson argued that Juncker needed to more clearly define the role before putting up another candidate.

The energy union idea sprang up recently in response to Russian aggression in the Ukraine. The successful candidate will be tasked with reducing Europe’s dependence on energy imports.

They will also oversee the EU’s climate change policy at a critical time for international negotiations.

National leaders are this month set to sign off an EU climate and energy framework to 2030, which the incoming cohort of commissioners will be responsible for fleshing out.

The EU will take this to global climate talks, which are due to reach a deal in Paris 2015.