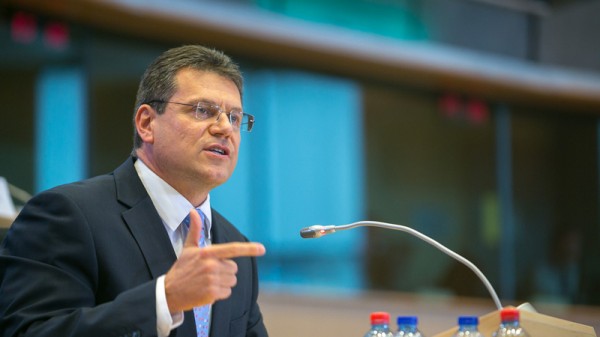 Europe should continue to be a “driving force” of climate negotiations, according to the new candidate to lead the “energy union” project.

Maros Sefcovic will have the task of building “a resilient energy union with a forward-looking climate change policy”, if his appointment is approved.

At his hearing for the energy union role on Monday evening, Sefcovic made a pitch for a united Europe to negotiate with Russia.

“Our inability to speak with one voice clearly limits our influence,” he said. “It is time for a more assertive energy policy.”

It was Sefcovic’s second hearing. He had already been approved as transport commissioner before being offered the more senior energy union role.

As an acting commissioner, the Slovakian is seen as competent and likely to be approved. But his national loyalties had been identified as a potential weak spot.

He has tended to vote in line with his country’s government on energy, which resists action on climate change and maintains close ties with Russia.

These are two key areas for action in the next five years.

The energy union concept was developed in response to Russian aggression in the Ukraine.

The successful candidate is expected to reduce Europe’s dependence on Russian fuel imports and take a tough stance in joint negotiations with this powerful neighbour.

In his mission letter to Sefcovic, Juncker wrote: “We need to pool our resources, combine infrastructures and unite our negotiating power vis-à-vis third countries.”

Robert Fico, Slovakia’s prime minister, indicated a softer approach in August when he described sanctions against Russia as “meaningless and counterproductive”.

Sefcovic insisted he would speak up for European interests.

An unapologetic Europhile, Sefcovic recently published a book arguing that anti-European parties could not be allowed to dictate the political narrative.

As vice president of energy union, he would oversee the work of several commissioners. These include the controversial appointee for energy and climate action, Miguel Arias Canete.

On climate change, European leaders are due to sign off a set of targets for 2030 next week, which the new commission will turn into detailed legislation.

This will be critical for the EU’s position in Paris next year, when negotiators are set to sign a global climate deal.

Juncker also expects Sefcovic to work with Jyrki Katainen, the vice president for jobs and competitiveness, on promoting green growth.

“I want the EU to become the world number one in renewable energies,” wrote Juncker.

Sefcovic has experience of taking a strategic role, having been responsible for “inter-institutional relations and administration” in the current commission.

He has also served as education commissioner and Slovakia’s ambassador to Israel.