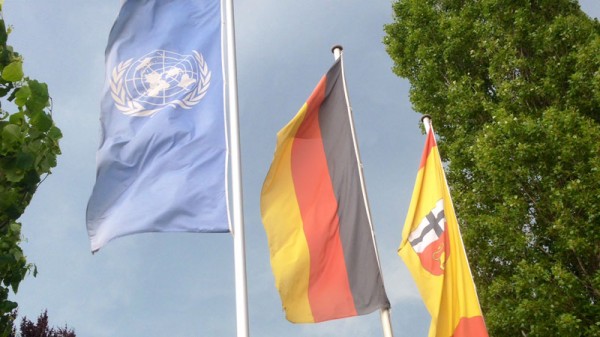 1506 – That’s the end of the opening plenary. We’ll be following the Bonn negotiations throughout the rest of the week, so stay tuned.

1456 – Environmental NGOs: Locking in low ambition in INDCs is a real danger. Calls for 5-year cycles, with first in 2025. The second representative, from the Third World Network, complains of unnecessary restrictions on civil society in Lima. She blasts those who would have INDCs focus on mitigation alone.

1454 – Youth (YOUNGO): Youth would like to focus on the urgency of INDCs. “They must constitute the highest level of ambition that all countries can possibly commit to.” Decisions will affect the future of billions of human beings to come.

1450 – Women and gender constituency: New agreement must take in rights, needs and capabilities of men and women alike. High risk technologies such as shale gas have to be kept out of 2015 agreement.

1447 – Research and independent NGOs (RINGOs in UN lingo): We do not adopt particular negotiating positions, but we are keen to share our research with you. Many RINGOs are students who will become the next generation of experts and diplomats, she says. She spells out areas where their research can help, including intellectual property – essential in discussions on technology transfer. “Please call on us” as you work towards an agreement, she says.

1446 – Farmers Constituency calls for a work programme on agriculture.

1442 – That’s it from country groups. We’re now hearing from other stakeholders in the process: business, local and subnational governments. These were players that had a loud voice at the Ban Ki-moon summit in New York last month.

business at #climate #ADP2014 talks: We want to be seen in the Paris agreement

1432 – Costa Rica on behalf of AILAC: Have made a proposal on overall structure of legally binding agreement for a ‘ratifiable’ Paris agreement. They want a cycle of contributions to be made over time. Also specifies the need for a global goal on adaptation. Their whole submission on this subject can be seen here.

1427 – Belize on behalf of the Central American Integration Unit: Makes a rare reference to Article 6, which talks about the role of education and information in climate change. They are planning to make a submission on this issue, says the delegate.

1418 – South Africa on behalf of BASIC: Welcomes initial contributions to Green Climate Fund, and urges all developed countries to follow suit by pledging session in November. Says that developed countries should take the lead based on their historical responsibility for climate change. Adaptation is as important as mitigation, she adds, and that National Adaptation Plans could form the basis to INDCs.

“conditional actions”. #UNFCCC art 4.7 (quoted by BASIC) likely to be at centre of discussions on INDCs at #ADP2014 pic.twitter.com/aUeWwVPkf5

1409 – Saudia Arabia on behalf of the Arab Group: Mitigation commitments from developing countries should be voluntary, spontaneous and in accordance with their financial capacities. Expresses concern at “weakness” of Green Climate Fund pledges so far, and accuses developed countries of “politicising” the Green Climate Fund by imposing “impossible” conditions on poor countries.

1402 – The afternoon round of talks are (supposedly) about to begin. Until they do, here’s one of the latest documents from the UNFCCC Secretariat – a Q&A on the legal nature of the agreement. There are three options on the table: a protocol, another legal instrument or an agreed outcome with legal force. Parties are still undecided, and possibly a bit confused, about which of these it will be.

opening #ADP2014 plenary highlights key issue for coming week: how to include adaptation in INDCs while ensuring enough mitigation ambition

1334 – Sven Harmeling from CARE International has summarised some of the tensions at play in discussions of the intended nationally determined contributions:

1322 – Camilla Born, from environmental think-tank E3G, told RTCC: “One of the things is there’s clearly a focus on adaptation. The EU seems to be getting its act together – they seem to be paying more attention. How that manifests itself will be something to watch this week. I think there will be a lot of discussion about the commitment period.” She’s written a blog with her details views on the week on the E3G website.

1238 – Because of this morning’s late start, there are now no translation services available. After interventions from Russia and Saudi Arabia expressing their discontent at this, the meeting has been suspended. It will resume at 3pm European time.

1226 – Ecuador on behalf of Likeminded Developing Countries: The three priorities for this session are fleshing out elements of draft negotiating text, identifying INDCS, enhancing pre-2020 ambition. Formal negotiations should take place in contact groups, rather than in bilaterials. Reinforces that discussions should avoid focusing on just mitigation, and reminds that INDCs are a “means, not an end” of 2015 agreement. Encourages parties to put forward their own texts, to encourage a party-driven process.

1217 – Venezuela on behalf of ALBA: Reinforces the division between rich and poor countries, embedded in the original Convention. Calls for all elements – mitigation, adaptation, finance, technology development and transfer, transparency and capacity-building – to be included equally in the text.

Venezuela calls for text-based negotiations and reminds the world that Kyoto had positive impacts. #ADP2014 #unfccc

1213 – Nepal on behalf of LDCs: INDCs should primarily focus on mitigation. Adaptation and finance should be in the core agreement.

1204 – Nauru on behalf of AOSIS: There are impacts we can no longer adapt to, so loss and damage must be part of 2015 agreement. “For us, adaptation is about survival.” He repeats a call for a 1.5C target – much more difficult than the current target of 2C. There is a lack of finance going towards concrete adaptation projects, he says. But mitigation is the most important, and enhancing pre-2020 ambition is the best way to go about this, he says. He calls for more high-level events to be able to share domestic action and partnerships.

1156 – Sudan on behalf of the Africa Group: Very precise expectation on mitigation in the INDCs. But 2015 is not just a mitigation agreement, he says – it should cover all the elements of fighting climate change, including adaptation and finance. He references confusion from the Warsaw outcomes – “contribution” seen as opening out the discussion from a mitigation-only focus.

1155 – Switzerland on behalf of the Environment Integrity Group suggests that adaptation could be done through a bottom-up approach.

1145 – Australia on behalf of the Umbrella Group: Signals willingness to negotiate on the nature of the INDCs. All countries must contribute to limiting emissions, he says. He nods to technical expert meetings as helping to enhance pre-2020 ambition at home. He adds that it’s time to get rid of the “divided world view” perpetuated by the UN convention.

1137 – European Union: Essential to make progress on INDCs ahead of Lima. There should be time to analyse these ahead of COP21 in Paris. This session needs to deliver a more concise document on the elements of the draft text. The EU’s full views are expressed in its UNFCCC submission.

1118 – Bolivia on behalf of the group of G77+China: Calls for developed countries to take the lead in fighting climate change. Poverty is first and overriding concern of developing countries, and the extent to which developing countries are able to fulfill their own commitments will hinge on money and technology transferred from developed countries – “a key enabling element”, he terms it. There is also a need to scale up adaptation finance, he says. G77+China will push for loss and damage to be included in the 2015 outcomes. Calls for a proper discussion on legal force of the new deal.

G77 – Calls for Workstream II to continue until the ‘ambition gap closes.’ … could be here for sometime. #ADP2014 #unfccc 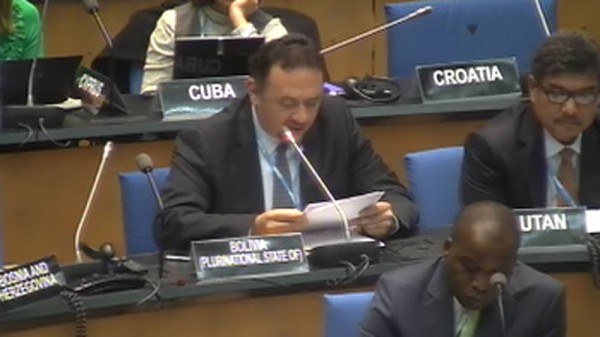 1117 – Co-chairs open the floor to statements from the parties. These will also be available on the UNFCCC’s website later.

1112 – This meeting will also deal with how to enhance pre-2020 ambition on climate change – known as “workstream 2”.

1110 – What happens to INDCs (“intended nationally determined contributions”) once they’ve been communicated? This is something parties have been asking, and which will be discussed during this session, says Kumarsingh.

1047 – Christiana Figueres  begins – as she did last session in June – with a reminder to countries that they still need to ratify the second commitment period of the Kyoto Protocol. She celebrates the achievements of the UN climate summit held in New York in September, which she says proves that there is the means to address climate change.

1046 – Manuel Pulgar Vidal, future COP president, takes the floor. He stresses that the Peru presidency wants the Lima COP to conclude with a text that has elements which are “clear and substantive…not just a list of ideas.” He adds that he is confident in the status of the negotiations, and believes that parties are not far from consensus.

1034 – There is very little time if a text is to be ready by May 2015 – it’ll need to be ready by April to be be translated into UN’s six languages, says Kishan Kumarsingh. He and fellow co-chair have called this “the bridge building session”, he says, stressing that “sticking to positions is not negotiating”.

1030 – Finally, the opening has plenary has begun. Co-chair Kishan Kumarsingh gives delegates a quick ticking off about the late start.

And not forgetting:
Christiana Figueres – executive secretary of the UNFCCC
Marcin Korolec – COP president, admirably willing to engage on Twitter

1003 – The co-chairs’ instructions to delegates to “start its meetings on time” in order to achieve “concrete results” appear to have been roundly ignored. The talks are now running over an hour late.

0954 – Ahead of the talks, 28 UN experts wrote an open letter urging states to consider the threat posed by climate change to human rights. They want the new deal to have specific language acknowledging that a healthy environment is central to a safe and secure existence, and that parties are prepared to fulfill their pre-existing human rights obligations under the UN by limiting climate change. Signatories include the UN’s human rights special rapporteurs on extreme poverty, transnational corporations and slavery.

0923 – For a more sober introduction to the talks, it’s worth taking a look at the scenario note issued by the co-chairs earlier this month. This lays out the background for the talks, and the priorities for this session.

It says that delegates must use this session to figure out what should be included in party contributions to the new deal – ie. should they commit to purely mitigation actions, or also finance, adaptation and other actions? This is key to getting pledges on time by March – but it’s always been controversial.

They also want delegates to talk about the commitment period of the new deal. Over what time frame will goals be set? Will there be an opportunity to crank these up in the interim?

All being well, most of these issues will be rounded off in Lima, but the co-chairs expect good progress to be made this week. “October is the time to start reaching out genuinely to each other and build bridges.”

0913 – While negotiators file into the room, here’s the latest dispatch from the UNFCCC communications office – a music video.

0850 – The UN’s climate body is meeting this week for its third round of talks this year. This session in Bonn, Germany, is the final set of negotiations before delegates come together in Lima for the annual Conference of Parties – which means the progress made here will be a big deal for the international climate agreement. I’m Sophie Yeo, and I’ll be taking you through the opening plenary, as representatives from each bloc of countries give their opening statements.