Africa faces trials, but there’s no doubt it’s a force to be reckoned with at Paris, says Tosi Mpanu Mpanu 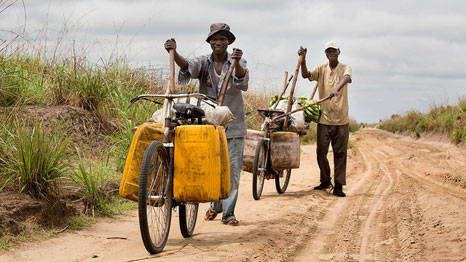 Africa is the continent most vulnerable to climate change, which means they’re prepared to fight hard at the forthcoming UN climate negotiations.

Its 54 countries – encompassing forest lands, expanding desert, and some of the world’s poorest people – are grouped together in one bloc, the Africa Group, which must somehow represent all their interests.

Tosi Mpanu Mpanu is enmeshed in the progress. He is fluent in the UN’s dry jargon and knows how to drive home the best deal for his country.

He chaired the group from 2009-11. He is now one of the candidates to chair the group of Least Developed Countries during the UN negotiations in Lima this December. He sits on the board of the UN’s green bank and directed the DR Congo’s clean development projects.

Yet despite this, his knowledge of Africa’s suffering cannot be suppressed, even in the negotiating room.

“It is very difficult to engage in the negotiations without emotions,” he says.

Thanks to the impacts of climate change, women are having to venture ever further to get water. Families are moving away from their homes, only to find themselves unwelcome guests in their new, already hard-pressed communities. “We are causing conflict among ourselves,” he says.

The UN science panel’s most recent report says that temperatures across the continent are likely to rise more quickly than in other land areas, particularly its more arid regions. Under a business as usual scenario, average temperatures will rise 4C across most areas in the late 21st century.

The difficulties faced by Africa when it negotiates as a group are many, he says.

Finding a common position among 54 nations, each with different requirements and in different stages of development, is not easy.

Some want payments to keep their forests intact. Some want to reduce their emissions through their agriculture – an idea abhorrent to others, who think their only responsibility should be to adapt.

“It’s not easy to agree on a common position, or you can come to a common position that is much diluted of its substance, because you need to find the common denominator,” says Mpanu Mpanu.

In Lima this year, he says, he would like to see the end of the notorious “huddle” – where against-the-clock negotiators gather in a small group to hash out an agreement.

These small and exclusive gatherings have taken place at the last three climate summits, in Durban, Doha and Warsaw, each resulting in a form of negotiating text influential countries can accept.

But African countries are invariably left out of these super-economy gaggles.

They also face the problem of being understaffed.

A report by 350.org to the UN’s climate body after 2010 talks suggested that delegations of under 17 struggle to cope with the multiple strands of discussion and the all-night negotiations of the UN talks.

When analysed by population, the EU is represented by 6.4 delegates per 100 million people, while Africa has less than 3. Djibouti, at the extreme end of the scale, had only three representatives during the 2010 talks in Cancun.

It poses serious logistical and technical problems admits Mpanu Mpanu, but also offers with some advantages. “When you speak with one common voice and you speak for 54 countries, you are a voice to be reckoned with,” he says.

UN climate negotiations have now been going on for over 20 years. Countries first decided that they must stop global warming at a landmark gathering in Rio in 1992.

Since then, greenhouse gas levels have soared, breaking a new emissions record for a single year in 2013.

“This could take even longer unless our western partners do not understand we don’t have the same problems as them,” said Morocco’s environment minister, Hakima El Haite, speaking at a conference in Marrakech last week.

But Africa’s unique vulnerabilities are not the only reason why the continent is keen to seal the deal in Paris next year – the deadline set by the UN for the new agreement.

A failure to sign a new agreement could cost Africa millions in climate aid, said Mpanu Mpanu, as it would force diplomats from the continent to move back into the politically complicated arena of bilateral negotiations. 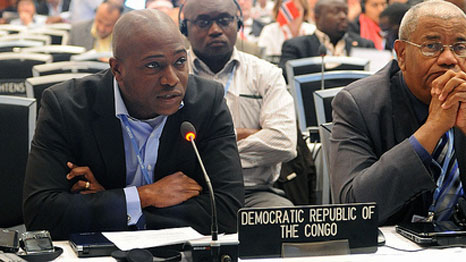 Mpanu Mpanu speaks at the UN for the DRC (Pic: IISD Reporting Services/Flickr)

A non-inclusive agreement, which does not include high emitters such as Canada and the US, would lead to countries tackling climate change on a bilateral basis, with stringent conditions attached to new climate investments.

Africa could lose out as rich countries withhold finance as protest against dictatorships or discriminatory legislation, he says.

“You can be penalised on the climate front because of the perception of human rights violation,” he said. “For example if you have legislation which is very constraining on same-sex, or gays, a developed country may say we do not agree with this, and will not fund this type of [climate] project.”

In the past, rich countries have used their aid budgets as a means to apply pressure to countries seen to be flouting human rights expectations.

After Uganda’s president Yoweri Museveni enacted harsh penalties for homosexuality in February 2014, Norway and Denmark diverted a combined $7 million from the country, while the US said it would review “all dimensions” of US engagement with Uganda.

“When you are under bilateral scheme you are not on an equal footing so you may impose conditionalities, you may impose instrusive verification approaches, things of that nature,” said Mpanu Mpanu.

The UN’s Green Climate Fund, which Africa hopes will receive at least $10 billion by December, will collect funds from international donors, before dispersing it to climate specific projects proposed by developing countries.

A finance expert who spoke to RTCC said that there were no “hard and fast” rules yet about excluding countries for human rights violations, but that this was like to be included through “safeguards rather than conditionalities”.

The World Bank, a UN institution, postponed $90 million in aid on the back of Uganda’s oppressive legislation.

What’s less clear is how the African continent’s strong links with China are likely to affect the negotiating positions of its member states.

The group is allied with the G77+China group—an alliance of 132 countries joined by an ideological position, although fractures are beginning to show.

According to the International Energy Agency, Africa needs US$3 trillion of energy investment by 2040, and depends on a vast amount of Chinese backing.

China is also Africa’s biggest trade partner, with $250 billion exchanged between the two in 2013.

And he confesses that despite their ideological similarities, this could make the African position difficult to maintain should a clash occur. “The climate discussions are complex. They have ramifications that go beyond the environmental realm,” he said.

But while the Africa Group remained close to China, every player in the international climate negotiations can only be expected to pursue its own interests, he adds.

“If an African delegate is not concerned about the interests of his country, he doesn’t have it at heart and doesn’t negotiate well with China, the Chinese official will not go the extra mile just to help Africa,” he says.

And he stresses that Africa’s reliance on Chinese investment did not constitute to a get-out-of-jail-free card for the world’s largest emitter.

Africans want developed countries to move first, but expect to see serious action from China to reduce emissions, regardless of its status as a developing country.