Stockholm says target would be in line with region’s capabilities, days before key meeting in Brussels 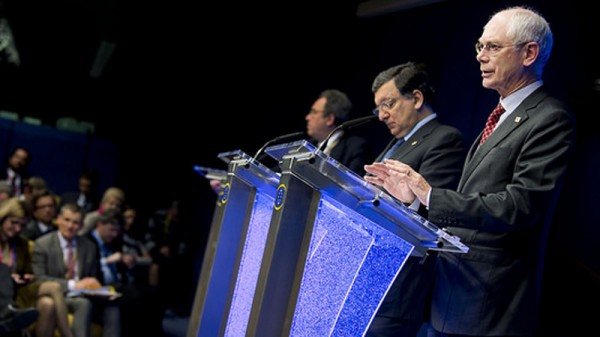 EU leaders meet in Brussels on October 23 and 24 to finalise the energy and climate package (Pic: EU/Flickr)

Sweden has called on the European Union to adopt a greenhouse gas emission reduction target of 50% by 2030s, 10 percentage points higher than current proposals.

The call from Stockholm’s new centre-left government comes less than a week before EU leaders are set to gather for a two-day meeting to discuss the bloc’s climate and energy strategy.

The Swedish proposals on carbon cuts are likely to be rejected by Poland, which says the 40% goal is already too high, but gain some support from the UK and fellow Scandinavian countries.

“The government wants to see a trend where the EU before the climate summit in Paris next year, COP 21, to be able to make commitments in line with their responsibilities and capabilities covering a climate goal of 50% emissions reductions by 2030 compared with 1990,” it said.

Sweden also calls for renewable energy levels to be increased to 40%, and a binding target “of at least” 30% for efficiency.

Recognising that negotiations between the EU’s 28 member states are at a late stage, the government adds that it will prioritise the 50% carbon cuts.

A draft agreement seen by RTCC sets a 40% GHG reduction target, together with a 27% renewables goal and 30% efficiency boost.

It makes no mention of an ambition boost from the EU in the event of a global emissions reduction deal at the UN next year, a proposal the UK has floated.

But Sweden could face stiff opposition from an eastern European bloc led by Poland, which says the 40% GHG target is already too high.

It would be “very difficult to move forward with what the commission is proposing,” he wrote, adding “we still have a couple of days till countdown.”

@rtcc_edking Good. It would make our intra-EU deal on 40% easier if SE lead by example and take upon them 50% target in nonETS.

While Denmark, for example, plans for its power sector to be fossil-fuel free by 2050, Poland predicts coal will still be its primary source of electricity by the middle of the century.

Warsaw and its allies are demanding cash and less stringent targets in exchange for their cooperation.

Around €3 billion a year will need to be transferred from richer EU states to poorer ones in order to meet future climate goals, according to a study by Greenpeace, WWF and CAN Europe.

In a sign that some countries are willing to compromise, Ed Davey, the UK’s energy and climate chief, said on Wednesday London could back down in its opposition to a binding efficiency target. “I don’t ever talk about red lines,” he said.

Analysis seen by RTCC suggests a carbon target of 40% could in reality end up being 27% after carbon offsets hoarded by some countries are accounted for.

An agreement in Brussels next week on a set of ambitious climate goals is seen as critical for the hopes of a proposed UN carbon cutting deal, due to be signed off in Paris next year.

The US and China will reveal how much they will contribute in terms of emission reductions early next year, and are expected to use the EU figures as a benchmark.