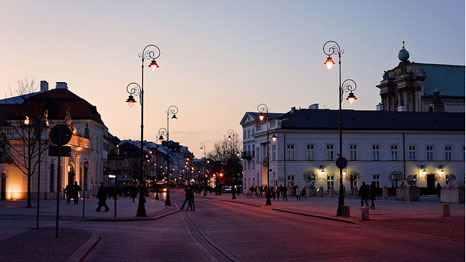 A central Europe coalition has challenged the EU’s latest package of climate policies, three weeks before they are set to be finalised in Brussels.

Ministers from the Czech Republic, Slovakia, Hungary, Poland, Bulgaria and Romania stated their opposition to renewable and energy efficiency targets – cornerstones of the package of climate change policies that the EU will finalise in October.

And they questioned plans to curb EU emissions 40% by 2030 on 1990 levels, saying a target “must be set realistically”.

The states, which together form the ‘Visegrad Group’ (V4+2), are among the poorest in the EU, and emit a disproportionately high volume of carbon dioxide due to their energy intensive industries and reliance on coal.

These countries have resisted the EU’s more ambitious climate policies, concerned that it would leave their economies facing an unfair burden in the transition to a cleaner energy system.

“The introduction of any legally binding renewable energy and energy efficiency targets at EU or national level is not desirable,” wrote ministers from the six countries in a statement, following a meeting in Bratislava, Slovakia.

They also said that the EU deal should make provisions for countries which are less able to take on higher emissions cuts, and establish a compensation scheme to help them to modernise their energy sector.

The European Council must approve this package at a meeting on 23 October. This will form the backbone of the EU’s commitment to a proposed UN climate agreement, scheduled to be signed off in Paris in December 2015.

The Visegrad Group’s opposition to the renewable and efficiency targets are “astonishing”, said Joris den Blanken, director of EU climate policy at Greenpeace, given the benefits and opportunities for renewables and energy efficiency in these countries.

For instance, around 70% of Poland’s coal-fired power plants are over 30 years old, with many due to be decommissioned, offering the opportunity for investment into cleaner alternatives.

Energy efficiency and renewables also offer these states greater energy security and independence, making them more resilient in the future – a growing concern, given Europe’s dependence on Russia’s gas. Russia has reduced its flow of gas to Poland amid tensions in Ukraine.

“There are many people wondering why the countries that benefit most are opposed – they are exposed to disruption and have the large potential for harvesting energy efficiency and renewables,” said Julia Michalak, EU climate policy officer at CAN Europe.

Despite these objections, observers were positive about the outcome of the Visegrad meeting, which they said reflected a more conciliatory stance than previous statements.

In particular, having France and Germany present at the discussions suggested that states were moving away from political posturing into “deal making mode”, said Manon Dufour, a senior policy advisor at environmental think-tank E3G.

“The discussions seem to be a little more settled than they were before. Now it’s really about finalising the last bargaining chips,” she said. “They are not calling against an agreement in October.”

Their weakened resistance could also suggest a growing difficulty to find common ground between the six countries. For instance, in August, the Czech Republic adopted a position actively promoting non-binding renewable energy and efficiency targets, but which was not reflected in the final statement.

“The final V4+2 declaration comes down to the least common denominator which may not reflect well the ambitions of each of the countries,” said Ondrej Pasek, an energy campaigner at the NGO Bankwatch.

Marcin Korolec, Poland’s climate change minister, tweeted that France and Germany – both strong supporters of the energy efficiency target – were invited to the meeting as it is “key to understand one another better before October”.

Joint declaration about to be signed. Good meeting. Strong V4+2 points on climate. Glad we discussed them with DE&FR. pic.twitter.com/tdhYfHNCCH

This openness makes it likely that a deal will be signed off this month, said Greenpeace’s den Blanken, who also acknowledged the statement as a move forward from previous positions.

NGO observers are keen to see a deal signed off in October, as this will form the basis of the EU’s contribution towards an international UN seal, set to be signed off in Paris next year.

However, the likely targets are far below the 55% emissions reductions that green groups say are necessary for the EU to make a fair contribution to keeping world temperatures below 2C.