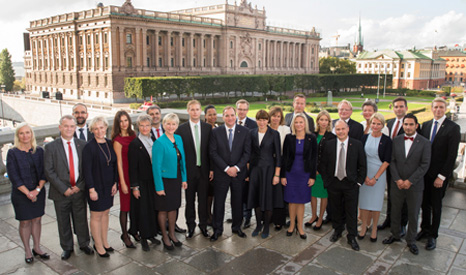 Speaking after he was appointed prime minister, Löfven said the new government would target investment in the low carbon economy to boost its competitiveness.

“Sweden will be a global role model for development, equality and in leading the fight against climate change,” he said.

“It will be a country known for human equality, self-confidence, solidarity and a belief in our ability to change the future.”

The appointment of a Green Party member to the vice prime minister post is a first, Adis Dzebo, a climate change researcher based in Stockholm told RTCC.

He said the post held “symbolic rather than real power”, but Romson carried political clout and was highly respected across the political establishment.

Johan Kuylenstierna, executive director of the Stockholm Environment Institute said Romson’s appointment “has the potential to raise the profile of the environment ministry.”

“It sends a signal that the government places a high emphasis on the importance of environmental issues, including climate change,” he said.

Environmental issues traditionally have a high level of attention in Sweden. Recent EU Parliament elections saw the Greens become the second largest party in the country.

The new government is likely to be scrutinised over its approach to nuclear energy, which it has hinted will be phased out, and whether this can be replaced by new hydropower plants.

It will also face an early test of its resolve at European level, with the region’s critical 2030 climate and energy package under discussion in Brussels.

Stockholm is a member of the 13-country strong Green Growth Group, which is pushing for the EU to adopt a greenhouse gas reduction target of “at least” 40% for 2030.

According to the country’s national submission to the UN’s climate body, by 2012 emissions had fallen 20% on 1990 levels, while GDP had grown 60%.

By 2020 the government said it wants to cut emissions 40% on 1990 levels, phase out fossil fuel use in the housing sector by 2020 and have a transport fleet running on clean energy sources by 2030.

But critics have said many of these emissions have been outsourced to developing countries. For instance, Swedish furniture giant IKEA produces 33% of its products in Asia, 22% in China.

“Hopefully there will be a change in discourse about how Sweden is accounting for its emissions,” said Dzebo.