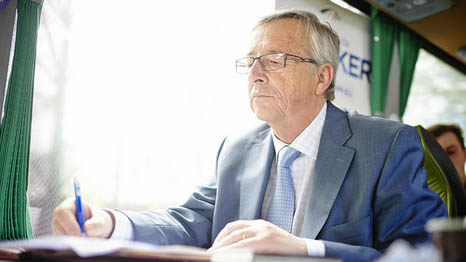 The incoming EU chief has no choice but to reshuffle his team of 27 commissioners after lawmakers rejected one of his appointments yesterday.

In the first defeat for Jean-Claude Juncker, MEPs voted against giving Hungarian nominee Tibor Navracsics the culture role assigned to him.

A handful of candidates, including the two responsible for energy and climate change policy, are on shaky ground after a fierce run of parliamentary hearings.

Alenka Bratusek, a former Slovenian prime minister put forward as vice president of “energy union”, was criticised for a “vague and evasive” performance.

Despite stressing the importance of climate action, she could not say who would represent the EU at international climate negotiations.

In an interview with viEUws, environment committee chair Giovanni la Via said Bratusek was unlikely to be approved for any commission role.

“Her performance during the hearings was not so good, she was very vague,” said la Via. “There are no groups that are ready to strongly fight for her.”

Members of the environment committee are set to take a vote along with the industry committee tomorrow.

The hearings come amid last-minute negotiations between member states over a 2030 climate and energy framework due to be signed off later this month.

The incoming commissioners will be responsible for working out the details of that framework and articulating the EU’s position at global talks.

Bratusek also faced allegations she had nominated herself, without the backing of Slovenia’s new government. She insisted three names were put forward and the decision was Juncker’s.

Miguel Arias Canete, the candidate for the energy and climate action portfolio, also got a rough ride.

Green and centre-left MEPs questioned his commitment to tackling climate change, in light of his ties to two oil companies and record as Spanish environment minister.

More than half a million people have signed an Avaaz petition to keep “petrolhead” Canete out.

However, his chances of keeping the position got a boost last night when the legal affairs committee overruled one of the main objections.

Canete’s prior involvement with the oil firms did not represent a conflict of interest, the committee concluded in a specially convened meeting.

The UK’s Jonathan Hill faces a second hearing today after failing to satisfy MEPs last week he was right for the financial markets portfolio.

A former lobbyist and relative unknown in Brussels, Lord Hill copped flak for a “lack of substance” in his answers on the complex topics of banking union and financial regulation.

France’s Pierre Moscovici has been asked to submit further written answers, while the Czech Vera Jourova also made a weak showing.

In one of the last few hearings on Tuesday, Finland’s Jyrki Katainen, the vice president candidate for jobs and growth, said sustainability was on his agenda.

He was “not too optimistic” about proposals for green taxation, but said the emissions trading system (ETS) was a priority.

The extent of changes to the line-up will depend on political negotiations.

Juncker might get away with swapping a few portfolios, or he could be forced to ask certain countries to put forward new candidates.

At least one commissioner questioned will not find Juncker team. My prediction: – Bratušek – out – Navracsics – changed portfolio

The different political groups of the European Parliament will meet on Wednesday and Thursday to discuss the candidates.

Leaders of those groups get together on Friday to agree a final evaluation of the hearings.

Juncker then has an opportunity to move people around before MEPs vote to accept or reject the package at a plenary vote on 22 October.