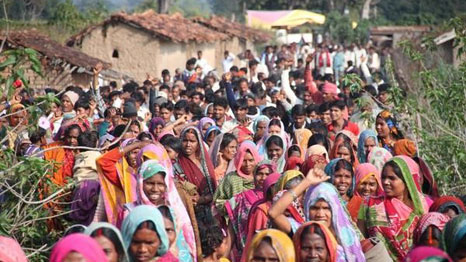 India’s Mahan forest has been given a temporary reprieve from the threat of destruction, after an environmental court today withdrew permission to cut down the trees.

The National Green Tribunal, an arm of the judiciary made up of legal and environmental experts, said that the forest clearance rights granted to two mining companies, Essar and Hindalco, were registered invalid by a US$ 33 billion coal scam which saw 214 mining licenses revoked this week.

The decision was welcomed by campaigners, including Greenpeace India, who had already challenged the forest clearance rights in a case which had yet to be resolved.

“Battling threats, illegal arrests and midnight police raids, we have come a long way,” said Kripanath Yadav, a resident of Amelia village, one of the 54 villages adjacent to the area marked for mining.

The Mahan in Madhya Pradesh is an ancient forest rich in biodiversity. Its resources sustain the lives of 50,000 people, Greenpeace claims.

In 2011, India’s former environment minister rejected the proposal to mine in the area on the grounds that “it will destroy good natural forest cover and interfere with wildlife habitats” but the decision was overturned.

The tribunal’s decision could be one of its last. The current government run by Narendra Modi has outlined plans to drastically reduce its powers. Currently it sits just below the Supreme Court in cases relating to the environment.

While the companies’ permission to clear the forest has been revoked, the fight to save the forest is not over.

Separate clearance rights remain for the block itself, which the government is likely to re-auction in sixth months’ time.

Essar and Hindalco have already invested heavily in the area, including the construction of an aluminium plant and two power plants that need to be supplied with coal.

This makes it likely that they will bid once again for the block once it comes on the market, despite heavy opposition from villagers and activists, who have asserted their legal rights to the forest.

“We know this might only be a temporary win, but our struggle will continue and we will oppose any future attempts to hand over these forests for mining,” added Yadav.

Any company who takes over the block will have to reapply for forest clearance.

But India is keen to reassure the corporate interests who were thrown off balance by the “coalgate” scandal which resulted in the cancellation of the 214 blocks.