Outcome of “coalgate” scandal grants temporary reprieve to ancient forests, but does not quench India’s thirst for coal 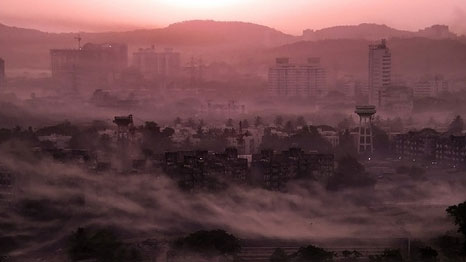 Mumbai at dawn, choking from the smoke of a nearby factory (Pic: Tawheed Manzoor/Flickr)

The supreme court of India yesterday cancelled the licenses of 214 coal blocks, which it said the government had allocated illegally.

The move grants a temporary reprieve to areas of the Mahan forest that were set to be felled to make way for an open cast coal mine. British-registered companies Essar and Hindalco had been granted permission to clear the area.

It could also make domestic coal production more expensive in India, a country which is struggling to address energy shortages.

But the court’s ruling is unlikely to stem India’s appetite for coal in the long term, with blocks due to be re-auctioned in six months.

Coal is a cheap but polluting fuel that makes up 60% of India’s power generation capacity. Its use is a major factor in India’s rapidly rising carbon dioxide emissions.

And India is not prepared to commit emissions cuts towards a global deal expected in Paris next year, arguing that industrialised countries must act first.

Prakash Javadekar, India’s environment minister, said at this week’s UN climate summit in New York that India’s emissions are set to increase – albeit at a slower rate – for the next 30 years.

“What cuts?” he said, in an interview with the New York Times. “That’s for more developed countries. The moral principle of historic responsibility cannot be washed away.”

And the government today unleashed a new initiative, Make in India, which aims to make the country a manufacturing superpower, including in the mining, oil, and gas sectors.

This includes plans to streamline environmental clearance applications though an online system and make exploration for oil and gas 100% tax deductible.

“Coalgate” is a two-year scandal which has plunged the manufacturing sector in India into uncertainty.

India’s supreme court said that the 218 coal blocks allocated to private and state-owned companies since 1993 were illegal.

Its ruling followed an investigation finding the government had sold the exploration rights off too cheaply, losing the country $33bn. Several politicians have been accused of using their influence for personal gain in the process.

These blocks produce about 9% of the country’s coal. The majority of India’s coal production is controlled by the state-owned Coal India, but these blocks were allocated in hopes of speeding up production.

Coal is a highly polluting fossil fuel. Its combustion damages air quality and warms the planet through releasing carbon dioxide.

India has lots of it, with 203 billion tonnes in reserves.

Yesterday, the court ruled that all but four of the blocks would be cancelled and passed back to Coal India to be auctioned in sixth months’ time.

The judgment read: “It is expected that the Government will not deal with the natural resources that belong to the country as if they belong to a few individuals who can fritter them away at their sweet will.”

It is a victory in the battle against corruption, which prime minister Narendra Modi made a core part of his election manifesto. Whether it will make a dent in India’s growing emissions is another matter.

“It’s a strong message from the highest court in the country to the government and industry that the laws of the land cannot be circumvented and disregarded,” said Vinuta Gopal, climate and energy campaigner of Greenpeace India, which has campaigned to protect the Mahan forest.

“The government has a stark choice —whether to develop a pro-people, pro-green economic model, or stick with corrupt, expensive, dirty energy.”

Auctioning off the coal blocks at market price could put an end to super cheap domestic coal, providing a window of opportunity to clean energy such as wind and solar, which India pledged to double by 2020 at the UN’s climate summit on Tuesday.

But it is unlikely to quash the country’s appetite for the dirty fuel in the medium term, as India’s newly appointed prime minister Narendra Modi tries to fulfil his pledge to provide uninterrupted power supply to all homes.

For the moment, coal power generators are turning to imported coal to make up for domestic supply shortages caused by the ruling.

And while shares dipped for many of the companies whose coal blocks were deemed illegal, Coal India rose by as much as 3.1% today, according to reports in the Indian press.

Coal India, dominant but cumbersome in the Indian coal market, will benefit from the cancellations as it takes over the coal blocks ahead of their re-auction.