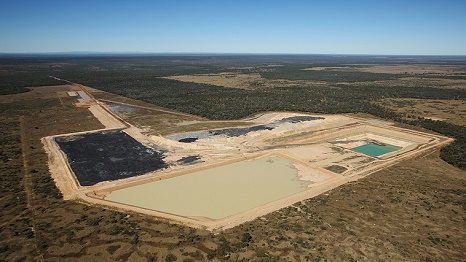 Plans for greenfield mines in the Galilee Basin involve building new port terminals near the fragile coral ecosystem. If they reach full production, Greenpeace estimates the mines could lead to carbon emissions equivalent to the seventh largest country in the world.

In a new report, the Carbon Tracker Initiative (CTI) warns investors that this is among US$112 billion worth of coal projects that will be surplus to requirements if global demand slows down.

Mining companies are counting on growth in demand from Asian emerging economies. But China’s “anything but coal” electricity strategy and energy efficiency efforts mean its demand for the black stuff could peak in 2016, according to the report.

“Those investors who have their wits about them are already pulling out of coal,” says researcher Luke Sussams. “It would be madness to invest in a greenfield coal mine now.”

In the most in-depth study of its kind, the CTI looked at the financial health of every coal project in the world and their future prospects.

It does not look good, CEO Anthony Hobley tells RTCC: “Many parts of the coal industry are operating at a loss and hanging on for dear life.”

The massive coalfields planned for the Galilee Basin are “already out of the money under a low-demand scenario”, the CTI found. Expansion of mines in the Powder River Basin, USA, “also has challenging economics”.

The global coal price has halved in the past three years, largely because demand from China did not grow as fast as producers hoped or expected. A shale gas boom in the US also played a part, displacing coal in the energy mix.

That is unlikely to reverse, under the CTI’s scenario, with Chinese coal demand peaking in 2016.

“The world’s coal industry is playing musical chairs with demand – every time the music stops another piece of the market is being taken away,” says research director James Leaton.

Burning coal for power is a major source of greenhouse gas emissions, which cause climate change. The fuel is twice as polluting, in carbon terms, as gas.

It also releases toxins that worsen air pollution, which is a major concern in cities, particularly in emerging economies such as China and India.

In recognition of the damage coal power does to the climate, major development banks have pledged to scale back finance to coal power projects.

However, it continues to appeal to developing countries as a cheap, large scale source of power – and the slumping coal price only boosts the cost argument.

The African Development Bank (ADB) has refused to follow its counterparts in rejecting coal. A senior official at the ADB accused Western countries of hypocrisy for denying poor countries an energy source they relied on in their own development.

And the CTI’s low demand scenario, based on analysis by the Institute of Energy Economics and Financial Analysis, only forecasts a 2% drop in coal consumption by 2035.

That is still much higher than the drop the International Energy Agency (IEA) says would be needed to stay within a carbon budget consistent with limiting temperature rise to 2C, a politically accepted level of global warming.

But it is a more bearish forecast than under previous policy assumptions. Between 2000 and 2012, the IEA says global coal consumption grew 60%, or 4% a year. 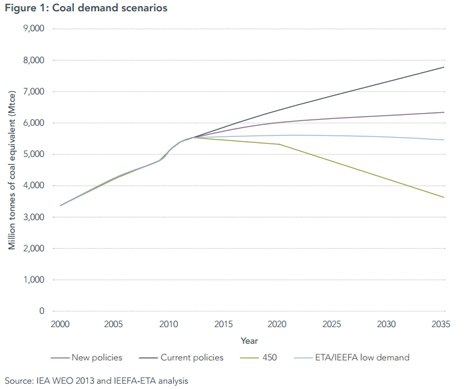 “We are not saying the coal sector is dead,” explains Sussams. “There is still space for cheap coal. We are just saying there seems to be very very little upside for investors, in terms of recovery of demand growth.”

This assessment does not depend on strong climate policy action, Sussams adds. Developments in clean technology, energy efficiency and concerns about air pollution are all eroding demand for coal.

The financial weakness of the sector makes it relatively easy to deal with its climate consequences, compared to the behemoths in gas and oil, says Hobley.

“From the financial perspective, it is much easier to deal with than the rest of the fossil fuel industry, because it is much smaller.”

The railway lines and ports needed to transport coal to its market make new mines a public spending issue, too, says Hobley.

“Governments have to spend a huge amount of money on coal infrastructure. It is not necessarily a positive for a country’s cash flow and treasury.”

The CTI’s strategy is to engage with investors in fossil fuels and show how climate change has made these once-reliable stocks more risky.

For the past three years, it has been steadily pushing the idea fossil fuel assets are systematically overvalued, creating a “carbon bubble”.

Action on climate change means curbing the fossil fuels, which emit carbon dioxide when burned for energy. To meet the political goal of limiting temperature rise to 2C, 80% of known fossil fuel reserves must stay in the ground, its flagship report found.

By showing the financial risks of fossil fuel stocks, Hobley says, “we level the playing field for low carbon investment”.

Investors tend to see clean energy as risky because it involves new technology and subsidies, but in terms of climate risk, it is on surer ground than more traditional sectors.