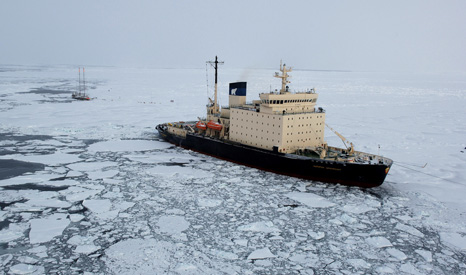 Russia is taking advantage of melting Arctic ice linked to climate change to gain a strategic advantage in the region, a senior NATO official has told RTCC.

The military alliance is currently trying to formulate a response to Moscow’s involvement in the ongoing crisis in Ukraine, with war raging in the east of the country.

“When you have a situation where climate change opens up a new strategic paradigm, that’s the sort of thing that an organisation like NATO will take an interest in,” said Shea, speaking to RTCC on the sidelines of the NATO conference in Wales.

He said that this was true “particularly where climate change can shift national borders or open up areas that become more significant.”

“Clearly an area which was a strategic no man’s land can open up and become a strategic centre of gravity in the world, as more and more military ships are going up and down, more and more commercial ships, even the prospect of a natural disaster,” said Shea.

He said that Russia was reopening Soviet bases in the Arctic, creating a presence that “wasn’t there before”.

In March, former US secretary of state Hilary Clinton denounced how Russia had been “aggressively reopening” its Arctic bases, calling for a “united front” with Arctic nation Canada on the issue.

In the UN’s most recent science report, experts found that summer sea ice in the Arctic had decreased by up to 13.6%, and said it was likely that the Arctic Ocean could be completely ice free during summer months before 2050.

In September last year, Russia opened up a base at the New Siberian Islands, which has strategic importance for the Northern Sea Route, which has been opened up by melting ice.

In summer months the Barents, Kara, Laptev and Chukchi Seas are now all open without icebreakers, creating a new route from Hamburg to Shanghai.

Russia has also move to stake its claim for oil, gas and mineral resources in the region. In 2007 it famously planted a flag on the sea bed, a move that was strongly criticised by the US and Canada.

More recently a protest by Greenpeace against Arctic drilling in September 2013 was met by force, with Russian commandos boarding its Arctic Sunrise vessel and arresting the crew, who were eventually released three months later.

“This is a serious thing for us. And we do not plan to soften (our stance), we will only be toughening it,” Putin told the Reuters news agency.

Shea also pointed to similar issues in the Maldives, made up of 26 coral atolls in the Indian Ocean, 80% of which lie less than one metre below sea level.

Rising oceans means that these islands could become uninhabitable unless the world takes quick and aggressive emissions cuts.

“A similar issue if if the Maldives disappear: would the Maldives still exist as a state? Even if they weren’t physically there, would they still own the drilling rights?”

Small island nations have been vocal in the UN negotiations calling for a 1.5C limit to global warming, highlighting the existential threat that it poses.

Such a limit looks unlikely, with emissions continuing to rise, leading the president of Kiribati to confess that it is “too late” for his islands.

Shea added: “These are issues that allies would want to monitor carefully.”

“If something is a challenge, sooner or later it will find its way onto the NATO agenda.”