Kiribati president: It is “too late” to save my islands 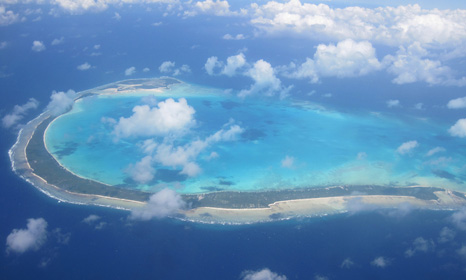 It is already too late to save many small island states from being swamped by rising seas, according to the president of Kiribati.

Even if the world agrees to dramatically reduce greenhouse gas emissions, “total annihilation” is now inevitable for Kiribati, Tuvalu, the Marshall Islands and the Maldives, with “drastic impacts” expected within the next 20 years, warned Anote Tong.

“Whatever is agreed within the United States today, with China, it will not have a bearing on our future, because already, it’s too late for us.  And so we are that canary,” Tong said in an interview on CNN.

Carbon dioxide, which is the main driver of climate change, remains in the atmosphere for centuries after it has been emitted. This means that the world is already ‘locked in’ to a certain level of global warming in addition to the 0.8C already experienced.

China and the US are the world’s two largest emitters of greenhouse gases, which warm the planet. This causes the sea level rise which is now threatening to inundate the low-lying small island states.

The US announcement of strict new regulations for coal-fired power plants was welcomed this week in Bonn, where negotiators are discussing a new UN climate change treaty, set to be signed in 2015. But Tong said he felt thees efforts are too little, too late.

A special report on the small island states in the UN’s latest science report, the IPCC, warned that, even with severe emissions reductions efforts, the temperature increase in the Pacific was likely to exceed 1.5C by the end of the century.

And a report from the UN Environment Programme released last week warned that sea level rise around the small island states could be up to four times the global average of 3.2mm per year. In the tropical Western Pacific, where a large number of islands are located, sea level rise of 12mm per year was measured between 1993 and 2009.

Negotiators from small island states are pushing for the globally agreed target of a 2C limit to global warming to be revised down to 1.5C, because of the existential threat that this poses to their nations.

Tong said that, while it might be too late for his own country, he hoped that it could provide a lesson that stronger action is needed on climate change.