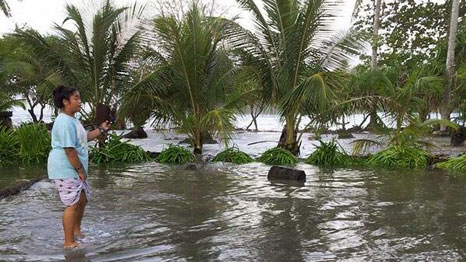 Pacific states like the Marshall Islands are having to contend with rising sea levels linked to climate change (Source: UNOCHA)

A 1.5C limit to global warming is now “out of range”, according to the chair of the UN’s most recent report on climate change, Ottmar Edenhofer.

This diagnosis, if realised, could be disastrous for the world’s small island states. The climate impacts associated with anything beyond 1.5C could lead to some of the remote Pacific islands, such as the Marshall Islands and the Maldives, becoming completely uninhabitable, as rising sea levels erode their low-lying coastlines.

But, speaking in London yesterday, Edenhofer said that he personally believed a 1.5C scenario was no longer possible. His view was based on the most recent report by the Intergovernmental Panel on Climate Change (IPCC), which assessed the economic and technological options for dealing with climate change.

He commented that, politically, it is a difficult thing to say: “I have to acknowledge there are lots of people on planet Earth who are very committed to 1.5C.”

He said that, when the final text was being negotiated between scientists and governments in Berlin last week, he realised “how fragmented the global community is, and how diverse value systems are.” This, he said, makes it difficult to disregard a 1.5C target, regardless of its difficulty.

The IPCC report notes that there are very few papers which deal with the feasibility of limiting warming to a maximum of 1.5C.

This temperature likely to be exceeded in all but the most extreme emissions reduction scenario, the UN panel said in its September report on the scientific evidence for climate change.

Without action to reduce emissions, sea levels could rise by up to 74cm by the end of the century, says the report, although regional variation means that small islands could suffer disproportionately.

“In the tropical western Pacific where a large number of small island communities exist, rates up to four times the global average … have been reported between 1993 and 2009,” according to the part of the report dealing with the impacts of climate change.

Climate change negotiators from the small island states continue to push for the global target of 2C, agreed at UN climate talks in 2010, to be revised downwards to1.5C to reflect their extreme vulnerability.

The UN has agreed to review the possibility of a 1.5C target next year. But the most recent IPCC report notes that the challenge of stabilising emissions is growing, as the world collectively fails to put a cap on greenhouse gas emissions.

On Saturday, the panel announced that, without additional efforts to reduce emissions beyond what is in place today, surface temperatures are expected to increase by up to 4.8C by the end of the century.

To keep temperatures below 1.5C would require “a lot of negative emissions”, said Edenhofer, referring to technologies designed to suck carbon dioxide out of the air, as “you cannot decarbonise the whole economy”. Measures would have to be taken to compensate for transport, for instance, where it is difficult to capture or decarbonise the emissions.

But such measures come with their own political complications. Debates over bioenergy were some of the toughest, he added, due to the land use and food security issues arising from the additional space required to grow the plants.

“That’s not a tough target in planetary terms,” he said, adding that it would still lead to a huge amount of problems, and that it would require a substantial global effort to stay within this limit.