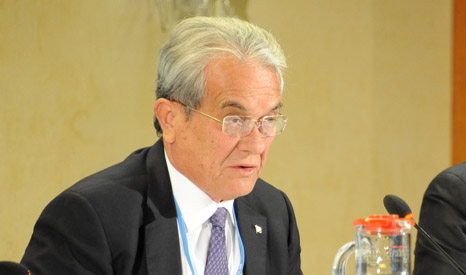 The Marshall Islands foreign minister has spoken of his anger at learning the leaders of China and India will not attend a major UN climate summit scheduled for September 23.

Speaking from Samoa, where he is meeting small island state leaders to discuss their efforts to deal with rising sea levels and other climate-linked weather events, Tony de Brum said he was “shocked” to learn the pair would not make the event.

“Every study I have ever read makes it clear that developing countries have the most to lose from runaway climate change,” he said.

“And for the small island states of the world, the science says we might be forced to pay the biggest price of all – the loss of our countries.  We expect solidarity from our developing country compatriots, not excuses.

“President Obama and more than 100 other leaders have already confirmed that they will be there.  All of the world’s leaders must look each other in the eye in New York and say, ‘we are all committed to signing an ambitious, legal agreement in Paris next year’.”

Marshall Islands president Christopher Loeak was the first head of state to commit to the meeting, warning it could be one of the last opportunities to save his country from slipping beneath the waves.

RTCC understands Jinping’s decision was made after he failed to receive a separate invitation to meet US president Barack Obama, who has confirmed his attendance.

Modi does have a meeting planned at the White House a week after the New York summit. However, his advisors were reportedly concerned he would have nothing to do in between the two events.

Senior UN officials attending the small island states gathering in Samoa have repeatedly stressed the need for emerging economies to buy into an emissions cutting deal, scheduled to be signed off in Paris next year.

“The plight of small island developing states highlights the moral case for climate action,” said Ban, in his address to leaders.

“By failing to act, we condemn the most vulnerable to unacceptable disruption to their lives.”

Scientists contributing to the UN’s IPCC climate science panel say global emissions are now rising faster than ever before. They warn the world is rapidly approaching its carbon budget, beyond which high levels of temperature rises will be locked into the climate system.