Heat sinking into the Atlantic Ocean accounts for a slowdown in air temperature rises, scientists find 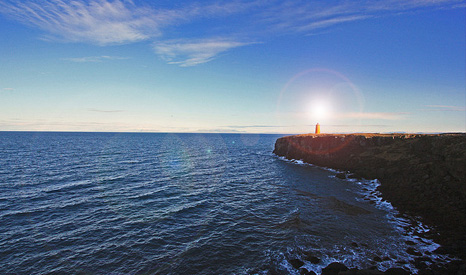 Heat is drawn deep into the northern Atlantic near Iceland
(Pic: Flickr/Helgi Halldórsson)

It is the question most vexing climate scientists right now: if the world is warming, why have air temperatures flatlined since the late 1990s?

Seized on by climate sceptics as proof the whole thing is a hoax, the global warming “pause” has many possible explanations.

The latest data analysis locates most of that missing heat deep in the Atlantic Ocean. While average surface temperatures hold steady, deep seawater is warming up.

Scientists at the University of Washington (UW) and Ocean University of China have found raised temperatures 2km below the surface.

“Many of the earlier papers had necessarily focused on symptoms at the surface of the Earth, where we see many different and related phenomena. We looked at observations in the ocean to try to find the underlying cause.”

Previous studies showed the Pacific Ocean has warmed up since the 1950s. Tung’s study suggests the Atlantic could be a more significant heat sink.

“This stored heat is the main reason for the surface temperature having flatlined,” he told RTCC.

“The finding is a surprise, since the current theories had pointed to the Pacific Ocean as the culprit for hiding heat. But the data are quite convincing and they show otherwise.” 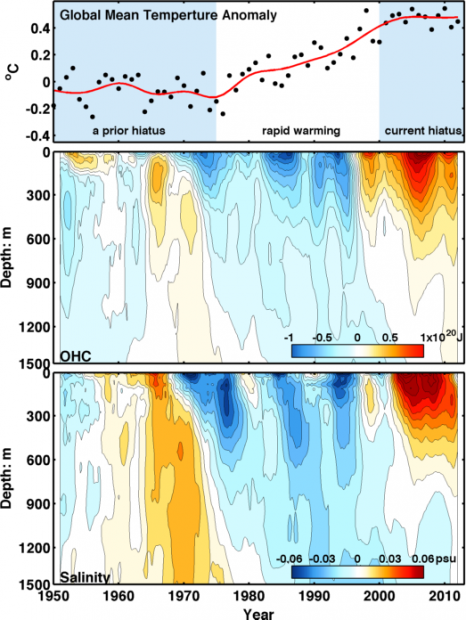 (Top) Global average surface temperatures, where black dots are yearly averages. Two flat periods (hiatus) are separated by rapid warming from 1976-1999. (Middle) Observations of heat content, compared to the average, in the north Atlantic Ocean. (Bottom) Salinity of the seawater in the same part of the Atlantic. Higher salinity is seen to coincide with more ocean heat storage.
(Source: K Tung / University of Washington)

There are currents in the Arctic driven by changes in salt levels, that the researchers found are storing heat.

Salty, dense water sinks below the surface in the northern Atlantic, near Iceland, drawing heat down with it.

“When it’s heavy water on top of light water, it just plunges very fast and takes heat with it,” explained Tung.

This current normally moves slowly, but speeded up earlier this century. At the same time as surface warming slowed down, more heat was sinking into the ocean.

While it is warming up now, the Atlantic also goes through cooler phases. Historic data shows it switches roughly every 30 years.

If that pattern continues, it could continue to absorb heat for the next ten years, slowing down the rise in average air temperatures. Then the atmosphere will start to warm rapidly again.

However, Tung said the complex effects of climate change made it hard to predict. “We are not talking about a normal situation because there are so many other things happening due to climate change.”

The paper adds fresh evidence to the debate, which is evolving all the time.

A study published in Nature Geoscience just a few days before concluded solar cycles and natural climate fluctuations were the main factors behind the warming hiatus.

There are also gaps in the measured data that mean average global temperatures don’t give the full picture, according to Reto Knutti, climate physics professor at ETH Zurich.

Weather phenomena El Nino and La Nina in the Pacific cause fluctuations in temperature year on year, Knutti said. “1998 was a strong El Niño year, which is why it was so warm that year.”

In the past few years, La Nina has had the opposite effect, lowering temperatures.

Solar irradiation had also been weaker than predicted.

This did not alter the long-term trend, Knutti said. “Short-term climate fluctuations can easily be explained. They do not alter the fact that the climate will become considerably warmer in the long term as a result of greenhouse gas emissions.”

This agrees with a major study by the UK’s Met Office, which found fluctuations in the rate of warming were to be expected.

Periods of rapid warming are likely to be interspersed with three or four 15-year “slowdowns” each century, it found.