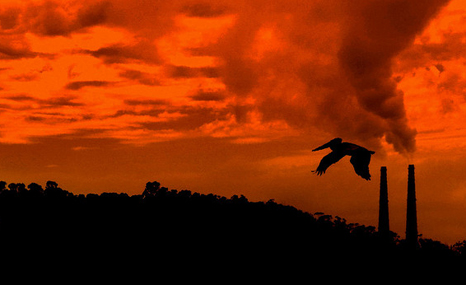 Prolonged slowdowns in global warming could occur as frequently as 3-4.5 times a century, according to new analysis published by the UK Met Office.

The findings were printed in a document distributed to delegates at the UN climate summit in Warsaw, which ended last weekend.

A recent slowdown in warming has been the subject of intense speculation by climate sceptics, who have cited it as proof that fears over climate change and temperature rises are unfounded.

But the Met Office Hadley Centre’s ‘Summary of the latest science’ suggests lengthy peaks and troughs are fairly usual, and we can expect more even as the planet warms.

Dr Peter Stott, Head of Climate Monitoring and Attribution at the Met Office Hadley Centre told RTCC the findings are based on calculations run through the organisation’s HadCM3 climate model, which can draw on data from 6000 years.

“We expect periods of 10-15 years of slower warming, and also periods of more rapid warming as well in future,” he said.

The UN’s IPCC AR5 report, published in September, attributed the pause to a variety of factors such as the absorption of heat by the oceans, aerosols in the atmosphere and a change in solar activity, but stressed temperatures are on an upward trajectory.

The major study also confirmed that scientists are now 95% sure that warming since the 1950s is directly attributable to human influences.

The graph below, taken from the Met Office brochure and based on data from the UK, NASA and National Oceanic and Atmospheric Administration (NOAA) indicates that there were a few relatively long periods of stable temperatures in the 20th Century.

Some of this is linked to an increase in atmospheric particles called aerosols, often a result of volcanoes or pollution from burning fossil fuels. 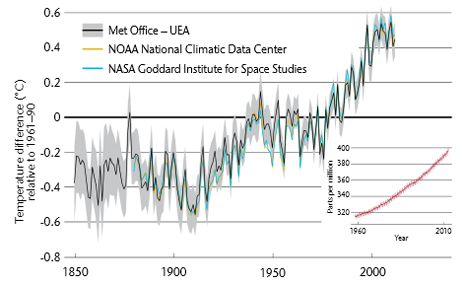 Apart from an address from the IPCC chairman at the start of UN climate summits, scientists do not traditionally play a role in negotiations.

Stott said the aim of the Met Office visit to UN talks in Warsaw was to discuss recent research and “express again the basic point that the world is warming and it’s warming associated with increased greenhouse gas concentrations.”

“This is being seen not just in surface temperatures but across the climate system. We wanted to get across this basic point,” he added.

“We also were talking about extreme weather events, and that with warming coming more extremes, and also about the research we are doing over variability and aerosols.”