Pacific is warming ‘faster’ than any time in past 10,000 years say Scientists, who say last 60 years have seen 0.18C rise 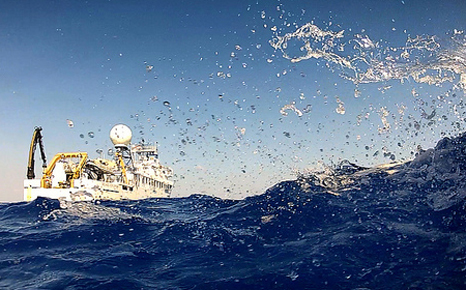 Areas of the Pacific are warming faster than at any time in the past 10,000 years, adding weight to theories that global warming may be ‘hiding’ in the world’s oceans.

In a paper published in the journal Science, scientists at Columbia University’s Lamont-Doherty Earth Observatory and the Woods Hole Oceanographic Institution say water temperatures up to 2,200ft deep have increased by around 0.18 degrees C since the 1950s.

Their findings will be seen as significant because climate experts have struggled to explain why the rising trajectory of global surface temperatures slowed markedly in the past 15 years, leading many to question the accuracy of longer term climate change predictions.

A major climate science assessment by the UN-backed Intergovernmental Panel on Climate Change published last month offered a variety of hypotheses for this slowdown, suggesting a decrease in solar activity, a rise in atmospheric airborne particles and ocean absorption could be to blame.

Models run by the team at Columbia based on an analysis of marine samples and a network of scientific buoys dotted across the seas indicate that warming in the past 60 years is 15 times faster than natural cycles in the previous 10,000.

“We’re experimenting by putting all this heat in the ocean without quite knowing how it’s going to come back out and affect climate,” said study co-author Braddock Linsley, a climate scientist at Columbia University’s Lamont-Doherty Earth Observatory.

“It’s not so much the magnitude of the change, but the rate of change.”

According to NASA, average global temperatures on Earth have increased by about 0.8°Celsius (1.4°Fahrenheit) since 1880, with two thirds of that warming occurring since 1975, at 0.15-0.20°C per decade.

Those readings have been based on surface measurements, which have guided scientific and political decisions related to climate change in the past two decades.

Drew Shindell, a scientist at Columbia and NASA says this research suggests it may be time to recognise there are a variety of temperature indicators that need to be taken into account, arguing that the warming pause may simply reflect “random variations in heat going between atmosphere and ocean”.

“Surface temperature is only one indicator of climate change,” he said. “Looking at the total energy stored by the climate system or multiple indicators–glacier melting, water vapor in the atmosphere, snow cover, and so on—may be more useful than looking at surface temperature alone.”