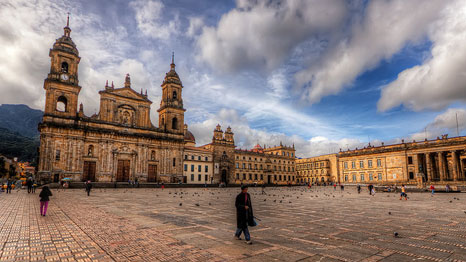 Colombia is drafting a new climate law that could put the country at the forefront of Latin American efforts to tackle climate change.

The first draft of the law is expected to be completed by November, so that the government can present it at a UN climate conference in Peru in December.

The law will set out targets for the country on reducing greenhouse gases, adaptation and finance, although exactly what these targets will be remains under wraps.

“The law will show what we’re trying to accomplish here, that we want to be an example to the world. It will help a lot in Paris 2015,” said Mauricio Umaña, director of GLOBE Colombia, who is working on the law.

Passing its own flagship climate law would put Colombia on a par with its Latin American neighbours, such as Mexico, which passed its own legislation in 2012, and Costa Rica, which is in the process of drawing one up.

Currently, Colombia has agreed to generate 77% of its energy from renewables and reduce deforestation in the Amazon to zero by 2020.

Colombia is already suffering from the impacts of climate change. A severe drought in Casanare in April this year, which killed 20,000 animals, spurred Colombia’s environment minister Luz Helena Sarmiento to invite Congress to start work on a climate law.

Those spearheading the process are now raising funds to hire international consultants, hoping that a solid first draft will invite strong, cross-party support in Congress when it comes to be presented.

“What we’re trying to do is take our own time so you cannot deny what’s in the law; you will never have the private sector denying it because we have already had the agreement from the government, civil society, and NGOs,” said Umaña.

“There are definitely environmental conditions attached and I think they will have to step up their game to appear a country focused on sustainable development and climate resilience,” she said.

“The results will gradually appear in society so Colombians can have a better picture regarding this law on the environment, the people’s economy and the possibilities of providing energy by unconventional ways and in appropriate times,” said Senator Jose David Name Cardozo, author of the bill.

But doubts remain over whether Colombia will live up to its environmental promises.

Despite being focused on clean energy, the new law continues to refer to Colombia’s fossil fuel development, including provisions to “Establish a cycle of rapid assessment for projects concerning hydrocarbons”.

Meanwhile, the government has come under fire for reducing the budget allocated to the environment ministry by 12.1%, even as a looming El Niño threatens to plunge Colombia into further drought.

Bustos added: “I would ask the government why are we putting this rhetoric forward across Latin America, but at home we’re not really implementing the processes.”