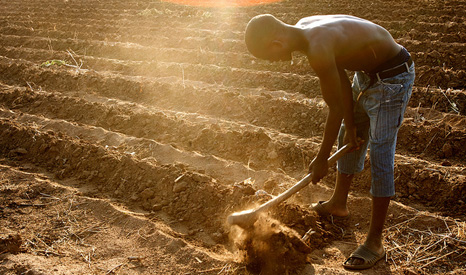 Two thirds of Africans can benefit from low-cost climate change adaptation measures, according to a report from the UN Environment Programme.

Africa’s population is set to double to 2 billion people by 2050. At the same time, climate change will increase the likelihood of drought, flooding and sea level rise.

Around two thirds of Africans’ livelihoods are directly linked to agriculture, nearly all of which is dependent on rainfall.

Climate change impacts could reduce water availability by 20-50% and cut crop yields in parts of the continent by 15-20%, the report said.

Achim Steiner, executive director at the UNEP, warned: “Such a scenario, if unaddressed, could have grave implications for Africa’s most vulnerable states.”

A number of pilot projects have shown how to protect against these risks.

In Togo, a US$100,000 scheme to build up two reservoirs gave more than 7,000 people better access to water. That in turn improved agricultural productivity.

Legislation to include rainwater harvesting in school building codes in the Seychelles, coupled with education in ecosystem management, helped save schools an average of US$250 on monthly bills.

Training in land management in Rwanda and Uganda protected forests and improve the quality of farming land.

“By integrating climate change adaptation strategies in national development policies governments can provide transitional pathways to green growth and protect and improve the livelihoods of hundreds of millions of Africans,” Steiner said.

It found adaptation to climate change caused by past emissions would cost Africa US$7-15 billion a year in 2020.

If the world agrees a deal to limit global temperature rises to 2C, the cost rises to US$35 billion a year. In the absence of such action, it could be even higher, at US$50 billion.

As part of a three-day summit of African leaders in Washington last week, the US Agency for International Development and the Rockefeller Foundation announced a US$100 million “global resilience partnership”.

This was to help African states cope with the effects of climate change, poverty and food insecurity.

The fund, which aims to raise starting capital of US$15 billion by the end of the year, is to finance both mitigation and adaptation projects in the developing world.