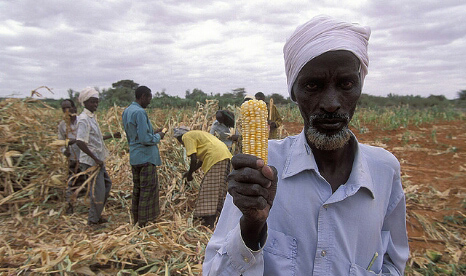 Vital climate adaptation projects in Africa are losing out to more lucrative energy investments in China and India, the head of the UN’s land degradation agency has warned.

Monique Barbut, Executive Secretary of the UNCCD, says millions of lives will be at risk unless countries take the threat of soil erosion and desertification more seriously.

In an interview with RTCC, she called on the board members of the UN-backed Green Climate Fund, which meets this week in South Korea, to ensure adequate flows of finance are supplied to communities already facing worsening climate impacts.

“Today, if you talk mitigation…you are talking about 40-50 countries. All the rest, they are suffering. The only way you can help them is adaptation, and nobody is seriously looking at this question,” she says.

“I am afraid most of the GCF discussion are going into programmes of mitigation issues…it means once again you are putting most of the donor money into those 50 countries for which it makes sense for huge mitigation. But are they really the poorest? Are they the ones who will suffer most from climate change and without having been emitters at all?”

Barbut’s comments come at a delicate time for the GCF board, which is under intense pressure to agree how, where and when its funds will be distributed.

In a March meeting the board gave assurances that at least 50% of all its finance flows would be directed towards adaptation in vulnerable regions.

Barbut, previously head of the GEF, another huge development fund, said this needed to be confirmed, stressing that she does not feel large energy projects in big emerging economies should be a priority.

“If you want to be totally fair, the issue of land is a good issue. And clearly, if you invest in the land, you also sequester carbon,” she says.

“There’s a side benefit…every year, if we were doing big programmes of land restoration, you could sequester up to 3 billion tonnes of CO2 a year – equal to a third of all carbon emissions in one year.”

The UNCCD, which estimates 168 countries around the world now suffer from some form of desertification, has long argued that the role of soil and drylands in addressing climate change has been overlooked.

Next year it will to present plans for a global land degradation deal, which if signed off would enshrine the principle of ‘zero-net land degradation’ around the world, a significant if ambitious statement.

African leaders have long felt they have lost out on global climate finance flows, largely due to difficulties in creating projects that are financially viable and replicable.

To place this in context, a 2012 study by the Overseas Development Institute revealed India, China and Indonesia alone received around $350m for climate adaptation and mitigation projects since 2003.

In contrast the whole of sub-Saharan Africa received $344 million. Around 25% of that was directed at South Africa, while adaptation projects received just 28% of the funds.

Fears over what the consequences of continued degradation of valuable farmlands in Africa are starting to exercise not just the UN, but officials at NATO and the Pentagon.

The Sahel region’s land is now rated as “very degraded”, much of it lacking vegetation.

Most countries in the region have recently experienced civil war, with Mali, Niger, Chad, Sudan, South Sudan and the Central African Republic all classed as failed or failing states.

A UNCCD booklet called the ‘Invisible Frontline’ describes the situation as a “silent invisible crisis that is destabilising communities on a global scale”, warning of food security and migration concerns.

Barbut argues that if big donor governments are concerned about value for money, restoring Africa’s lands should be a priority, rather than building power plants for their competitors.

“What we are talking about does not cost much,” she says. “To restore a hectare of degraded land is between $20-60. Niger’s humanitarian assistance in 2011 was about $160 million.”

“If you put that money to restoring land it would have helped to rehabilitate 3-7 million ha of land, half the country’s total arable land. We are not talking about hundreds of billions…we are talking of a very small amount of resources.”

As populations and food prices soar, she says this is likely to become a political imperative, rather than the forgotten child of climate change it is at the moment.

A new UN project involving 12 countries with funding from Korea will launch soon, set to explore ways in which countries can measure how they are caring for their lands.

And far from simply being an African issue Barbut – a former French diplomat – says it’s one developed countries need to pay more attention to, especially if extreme weather events like the heavy storms experienced by the UK last winter become a regular occurrance.

“I have seen pictures of David Cameron at the beginning of the year, with his legs in water. Of course you had big rains, but the problem is that the consequence of the rains is worse because nothing is there to retain the water,” she says.

“You may not be sure 100% of floods this winter are linked to climate change, but if you apply the principle of precaution you take it as an assumption and you see what you can do to mitigate those effects.”