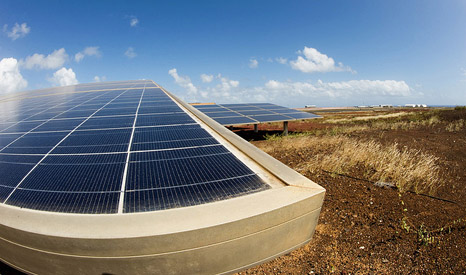 Speaking in Washington on the sidelines of a major US-Africa summit, Ositadinma Nebo said the falling costs of solar made it increasingly attractive to African policymakers.

“Solar is gaining parity with other generation sources,” he said, “and it can meet the gap for communities far from the national grid.”

But he said the Nigerian government would rely heavily on gas and coal for on-grid power in the coming decades. US energy giant GE plans to develop 10GW of capacity.

“There is no doubt that the potential is there. Clean coal technology can give us good electricity and minimum pollution at the same time,” he said.

“It’s important we let Africa be. Nuclear power is also something Africa can latch onto.”

According to the US Energy Information Administration (EIA), some 15% of Tanzania’s population has access to electricity. Half of that is generated from hydropower and half from fossil fuels.

Muhongo added the country had scrapped plans for more hydroelectric dams, as climate change is set to make water flows unpredictable. Coal is expected to take a greater share, along with geothermal and solar.

Nigerian finance minister Ngozi Okonjo-Iweala said her country needs US$14 billion of investment a year in energy and related infrastructure.

Nigeria recently privatised its energy sector, raising US$2 billion. Okonjo-Iweala said that was a first step in making the sector more transparent and attracting foreign investment.

Nigeria has huge natural energy resources but the World Bank says half the population does not have access to electricity.

Regional governments say this is slowing development, with regular blackouts. Nebo said Nigerians use 12,000 litres of diesel and kerosene every day to drive back-up generators.

The majority of Nigerians use wood, charcoal and waste to fulfill household energy needs such as cooking and heating. These release harmful fumes and carbon pollution.

Sub-Saharan Africa has around 80GW of installed power capacity, comparable to Vietnam. The whole of Africa has about as much installed capacity as Belgium.

“Right now we have to be serious about what we’re going to do to boost energy supply. And if we find ourselves in a situation where some say ‘no coal, no nuclear, no hydro,’ then we’re not serious.

“The growth of solar and wind is a fantastic development and I think it’s going to grow even more, and we have to make sure the financing is available.”

Kim has previously said the World Bank would only fund coal where there was no alternative. It preferred to focus on wind, solar and other renewable technologies.

Further clean energy investment is set to flow into Africa through the UN’s new Green Climate Fund, which is still gathering donations from western governments.

The three-day US-Africa summit involves heads of state from nearly 50 countries that are “in good standing” with Washington.

Talks are expected to touch on the US-run Power Africa initiative, which aims to deliver 10GW of new and clean electricity to the continent.

On Monday the US Agency for International Development (USAID) and The Rockefeller Foundation announced a $100 million “global resilience partnership”. This aims to help African states cope with the effects of climate change, poverty and food insecurity.

“Disasters and shocks pose an unparalleled threat to the world’s most vulnerable communities and hamstring global humanitarian response,” USAID administrator Rajiv Shah said in a statement.

“This new bold partnership will help the global community pivot from being reactive in the wake of disaster to driving evidence-based investments that enable cities, communities, and households to better manage and adapt to inevitable shocks.”