Meet the weaver who stopped miners destroying her forest 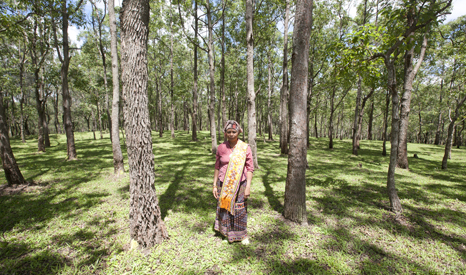 When the government of West Timor gave mining companies permits to exploit resources in the forest, one woman was determined to stop them.

Aleta Baun endured violence and threats in her efforts to drive out miners. She was ultimately successful and won a Goldman Environmental Prize.

Now Mama Aleta, as she is known, sees an opportunity to use UN funding to protect the forest, which helps reduce the impact of climate change. But she is concerned the government that handed out mining permits might not use that money wisely.

Mama Aleta speaks through an interpreter from Bali, where grassroots women and environmental activists gathered for a conference this week.

Organised by the International Network of Women’s Funds and the Greengrants Alliance Fund, the summit aimed to give women community leaders a voice on climate change.

With a budget of just over US$6 million a year, the Greengrants Alliance Fund operates at a much smaller scale to development banks and UN green funds.

Yet by empowering activists like Mama Aleta, who directly confront big business, it can have a major impact on the economy and the environment.

Mama Aleta has been resisting forest destruction for nearly 20 years.

She is from the indigenous Mollo people, who believe plants have souls and must be protected.

The forests also provide natural dyes that the Mollo people use in their traditional weaving.

Mining started across the Indonesian island of Timor in the 1980s, leading to deforestation, water pollution and landslides.

Villagers were not consulted on these developments.

In 1996, when the companies moved in with plans to quarry marble from the Mollo’s sacred mountain, Mama Aleta decided she had had enough.

She organised a protest that culminated in a year-long camp at the marble site.

Some 150 women from the community took looms to the mine’s entrance, so they could continue their traditional weaving as they demonstrated.

It was a peaceful protest that got an aggressive response.

“I was terrorised, I was beaten up,” says Mama Aleta. “I had to flee from my house, because it was no longer safe. I had to be separated from my husband and children.”

She filed a police report but it was not taken up. “They said the struggle of these people is against development. The government feels like we are at fault.”

In 2007, after a long struggle, four mines in the area closed for good.

Attention turns to building up the community’s economic power in sustainable ways, so it can resist the lure of mining jobs.

The UN has a programme called REDD to prevent deforestation and the carbon emissions that go with it. It stands for ‘Reducing Emissions from Deforestation and Forest Degradation’.

The idea is to pay developing countries to preserve their forests. That removes the temptation to let business interests clear the trees for farming or mining.

It can also be a cost-effective way to mitigate climate change.

However, the programme has struggled to raise funds amid concerns over the poor governance records of some would-be recipients.

The recipients need to be able to monitor huge areas of trees and show they are effectively preventing damage.

It is a controversial issue among indigenous forest communities, too. Some are concerned REDD will hand control of their lands to outsiders.

Mama Aleta’s community has started planting trees to try and rehabilitate the forest.

She is seeking to raise money for the Mollo people to map their lands and assert their rights.

This could put them in a position to receive REDD funding, but only if the UN is prepared to look beyond the government.

“REDD can be an opportunity for the community to rehabilitate the forest that was damaged,” says Mama Aleta.

“But if the government keeps giving permits to other commercial activities then the solution is not through them.” 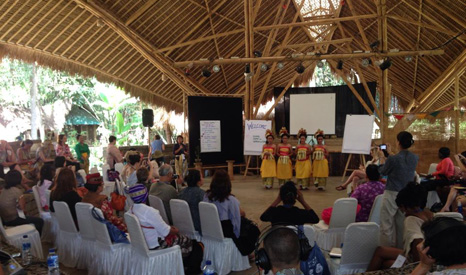 The UN and grassroots movements are two worlds that rarely collide.

In contrast, she says many of the solutions to climate change are local solutions, both in adaptation and mitigation.

“So much money from the UN is flowing to the larger organisations and in East Africa, say, you see a series of villages where women are in charge of the agriculture,” says Odendahl.

“They are working with new forms of irrigation and at the same time they have got solar panels on their thatched roofs.”

Working with women’s groups, Odendahl wants to give grassroots leaders a greater voice on climate change.

The UN is backing efforts to raise US$15 billion as starting capital for the Green Climate Fund.

Odendahl thinks “some of that money could come our way”.

If not, she adds, “that money is going to flow into government and yet the indigenous people, who have done a lot of work stewarding [the environment], are less likely to get it”.

Mama Aleta has shown what can be achieved on a minimal budget by a few resolute women.

Any UN strategy that ignores the power of the grassroots is missing a trick.