The UN’s REDD+ system looks to compensate developing countries for not cutting down their trees with money from rich nations. In return they receive carbon credits. The scheme faces many challenges on the ground but the rewards could reach beyond the forest as the Democratic Republic Congo demonstrates.

Implementing a UN-backed scheme to slow forest loss in the Democratic Republic of Congo will be difficult, a new study says, until the government addresses corruption, a lack of state authority in some regions, and intermittent fighting between rebels and government forces in the country’s east.

Despite these challenges, the authors say that the scheme could actually help improve governance in the country.

The report, The context of REDD+ in the DRC: drivers, agents and institutions (in French), to be launched at a forestry conference in Yaoundé, Cameroon, this week, contains an in-depth review of the governance, socio-economic and environmental situation in the central African nation.

The CIFOR research – carried out with the local non-governmental Council for Environmental Defence through Legality and Traceability (CODELT) – adds to comparative studies carried out in other tropical countries.

The research draws from the existing literature on forestry and extractive industries in the DRC as well as from interviews and observations collected in the country in 2011 and 2012.

Two decades after the country experienced a succession of wars, the DR Congo has taken significant steps to rebuild institutions and maintain stability. International organizations remain cautious, however: Last year, a European Union high representative described the country as a “fragile state”.

Against this backdrop of caution, there is hope that protecting Congo’s forests could attract financial assistance under a scheme to Reduce Emissions from Deforestation and forest Degradation (REDD+), which sees funds channelled from developed to developing countries to keep their trees standing.

The authors believe that REDD+ itself has the potential to trigger policy change and reforms in the DRC.

“REDD+ should inititate the coherent re-shaping of principles, norms and strategies for land use, forests, mines, agriculture and infrastructure development in the DRC, said Samuel Assembe, post-doctoral researcher at CIFOR and co-author of the report.

“It should pave the way for practices that would be increasingly compatible with the need to combat climate change,” he added. 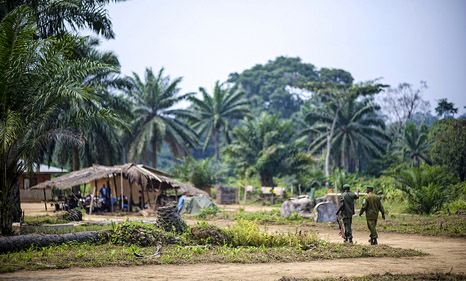 Forest guards in the Ledima Reserve in the Democratic Republic of Congo (Source: Flickr/CIFOR)

In addition, it seems that REDD+ has brought a variety of new actors from civil society into the arena, and has seen new policy coalitions emerge, the authors said.

The report is frank about the challenges, however: “With regard to the current situation in DR Congo, it appears difficult or quasi-impossible to implement REDD+ at the grassroots level,” Assembe said.

The report highlights shortcomings in the Congolese administration, leading to “the virtual absence of State authority in some regions” and insufficient resources and capacity to manage REDD+ programmes. Chronic conflict that flared up in the eastern part of the country a year ago has only compounded existing difficulties.

“Popular discontent against the established political regime and its action poses a risk of accelerated social exclusion, which could not be prevented from affecting REDD+,” Assembe said.

Though the DRC has the second-largest tropical forest area after Brazil, the lack of infrastructure development, investment and demographic growth during successive wars since the mid-1990s reduced pressure on the environment.

Yet an informal – sometimes criminal – exploitation of forest resources has developed in the meantime. Moreover, the researchers found that most progress to date has been confined to the capital, Kinshasa, with few links to local communities.

Progress must begin somewhere, and to that end, NGOs and ministries in Kinshasa could be used as a springboard to develop the REDD+ process, Assembe said, though this would require significant technical expertise.

“The monitoring of forests and their evolution is one area where the DRC needs to grow its capacity. From the generation of satellite data to the training of scientists to analyze them, much more could be done to help keep track of deforestation,” Assembe added.

There are signs that such expertise might not be far off. A project being implemented by CIFOR and several partner institutions in the DRC is currently training the next generation of Congolese forest researchers. The REFORCO (Congo Forestry Research) project, funded by the European Union, is supporting the training of home-grown Master’s and PhD students in forestry; several dozen students have recently graduated.

Even with an influx of new ideas and expertise, political will is required. According to Augustin Mpoyi, Executive Director of CODELT and co-author of the study, the DRC’s problems are surmountable, but it could take years yet before the country is able to implement efficient and transparent REDD+ programs.

“Mentalities need to change,” Mpoyi said, “and our political leadership must understand that everyone would benefit from better governance.”

For more information on issues discussed in this article, please contact Samuel Assembe at [email protected].

This research is carried out as part of the CGIAR Research Program on Forests, Trees and Agroforestry and was supported by the Department for International Development (DFID), AusAid, the Norwegian Agency for Development Cooperation (NORAD) and the European Commission.