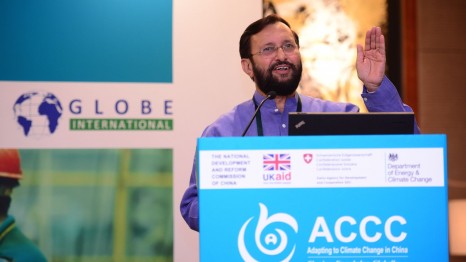 Environment ministers from four of the world’s leading emerging economies meet in Delhi on Thursday to discuss plans to address climate change.

The BASIC group, made up of India, China, Brazil and South Africa, usually meet two to three times a year in an effort to coordinate their negotiating strategy at UN climate meetings.

Together the four countries are responsible for around 35% of global greenhouse gas emissions, which cause climate change.

While the substance of the two-day gathering is not expected to stun seasoned observers of UN talks, Lavanja Rajamani from the Centre for Policy Studies in Delhi says it does hold symbolic value.

“They missed a meeting that was supposed to be convened a few months ago, so the fact that they have decided to have it is quite significant,” she told RTCC.

“The other thing I have noticed in the past few years is that BASIC are playing a more constructive role [at UN talks]. The very fact they are meeting and making an effort at ministerial level is quite important.”

Key topics up for discussion are likely to be how emission reductions can be ‘equitably’ shared between rich and poor countries, together with the criteria used to develop the nationally determined contributions (NDCs) for a proposed 2015 climate agreement.

Both these issues remain unclear, and have been the source for considerable disagreement between various parties at UN talks.

In the past 12 months the BASIC group has come under increased pressure to outline what levels of carbon cuts its members would consider.

Earlier this year the UK’s climate envoy Sir David King said India and Brazil were stalling international talks over their desire for developed and developing countries to be treated differently under a UN climate agreement.

Leading developed and emerging economies are expected to deliver their emission reduction numbers to the UN by March next year, although China has already indicated it may be late.

ANALYSIS: Why are UN climate talks so difficult?

US secretary of state John Kerry and his climate chief Todd Stern pushed India prime minister Narendra Modi on this issue at a meeting last week, and announced subsequently Modi understood the “urgency” of taking action.

Few details have emerged from the new government over its attitude towards a UN deal. According to Rajamani, that situation is unlikely to change imminently.

“Thanks to Kerry and Stern’s visit they have had to engage,” she said. “I think they are engaging on a more operational level and areas of surer ground, like HFCs, rather than peaking years and emission trajectories.”

Discussions over future climate targets could highlight significant gaps between the four countries in terms of their preparation ahead of 2015.

South Africa and India are reportedly lagging, Brazil’s government is focusing on domestic climate policy planning, while China is set to unveil its long term strategy in the 2016-2020 five-year plan, due out next year.

Last month China’s chief climate negotiator Xie Zhenhua said the country could announce a carbon cap early in 2015, although he did not specify implementation timelines or what it would be.

“Study and research are going on… in the first half of next year we are hoping we can announce China’s nationally determined contribution and in that, the capping year might be included,” he said.

But despite varying progress on developing domestic climate regulations, none of the four are likely to break ranks and unilaterally announce its contribution for the 2015 deal with consulting with the others.

“There are differences between them, but I think, as we saw in Warsaw, they are all on the same page in terms of certain geopolitical concerns,” said Rajamani.

The group will meet again ahead of the UN’s Lima climate summit, where a draft text for the 2015 agreement will be presented to delegates.