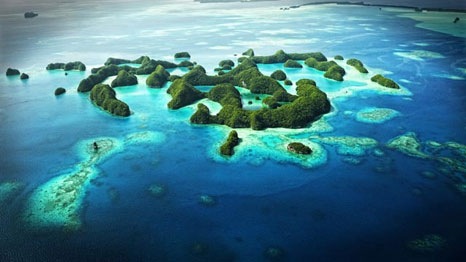 The Pacific Islands say they will push for an agreement on ocean conservation at UN Secretary General Ban Ki-moon’s climate summit in September.

The Palau Declaration is the product of four days of discussions, which wrap up today, between Pacific Island states at their annual Forum.

“As Leaders of the Pacific Islands Forum, we have and will continue to play a central role in the stewardship of one of the greatest natural endowments in the world – the Pacific Ocean,” says the Declaration.

It is backed by 16 countries, including Australia, whose reputation as a climate laggard has rocketed since Prime Minister Tony Abbott repealed the carbon tax earlier this month.

Abbott has already indicated that he will not attend Ban Ki-moon’s climate summit, which will take place alongside the UN General Assembly. The Secretary General has called world leaders to New York to create momentum ahead of a UN climate deal which is set to be signed off in 2015. US President Barack Obama has confirmed that he will attend.

Australia’s disinterest in combatting global warming is already creating friction with the ambitious small island states, with New Zealand Green Party delegates at the meeting reporting that leaders had expressed frustration at their lack of action.

Marshall Islands president Christopher Loeak was the first to confirm attendance to the Ban Ki-moon summit back in April.

The Declaration reinforces the particular threat that climate change poses to the vulnerable nations, which they say compounds other development concerns, such as overfishing, urbanisation and fossil fuel dependency.

In the most recent UN climate science report, scientsts said that as oceans warm and the Arctic ice melts, the ocean is rising, causing an existential threat to some of the small island states, which lie only a few feet above sea level.

As well as causing humanitarian issues, as locals are forced from their homes by eroding coastlines and flooding, it could also create a legal headache over disputed territories, which the Declaration sought to address.

“We call for strengthened regional efforts to fix baselines and maritime boundaries to ensure that the impact of climate change and sea level rise does not result in reduced jurisdiction,” it says.

The Declaration called for the importance of the oceans to be cemented by a dedicated goal to oceans within the UN’s Sustainable Development Goal, which are currently under negotiation and which will form the basis of the world’s post-2015 development agenda.

A Working Group on the goals included “Conserve and sustainably use the oceans, seas and marine resources for sustainable development” among the 17 goals that they will forward to the UN General Assembly, but there is a possibility that these could be whittled down in further negotiations. Currently, the UN only has eight development goals.

“We are coming to the table as small island states and are not advocating that one size fits all. Our concern is the sustainability of oceans resources,” said Tommy Remengesau, president of Palau, on Tuesday.

“We cannot call ourselves Pacific Islanders if we are not associated with the ocean. That is a fact of our lives and therefore we’re passionate about it.”

Last year’s Pacific Islands Forum in the Marshall Islands concluded with the Majuro Declaration for Climate Leadership, which was also presented to Ban Ki-moon as a “Pacific gift”, and garnered international support from Mexico, Indonesia, Korea, Thailand, France, Malaysia and Costa Rica.