India and US pledge “active cooperation” on climate change 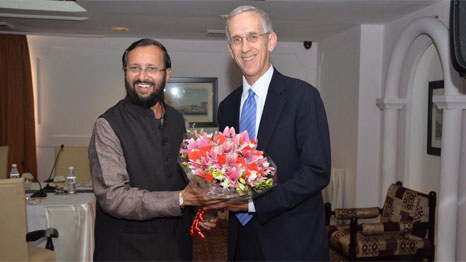 India and the US have pledged to work actively together on an international deal to prevent dangerous levels of global warming.

A US delegation led by John Kerry, and including climate change envoy Todd Stern, is currently in India meeting with ministers and high-level officials.

Stern met on Wednesday with Indian environment minister Prakash Javadekar, prior to a session of the Indo-US Joint Working Group on climate change, which was established in September last year by the two countries’ leaders.

“I think this joint partnership will go ahead and become very active cooperation partners in this work,” said Javadekar, in a joint press conference with Stern, adding that India’s new Prime Minister Narendra Modi is “much committed” to the climate change debate.

“The US has also gone through all the phases of development and has developed many technologies we can share,” he said.

He also underlined the importance of capitalising the Green Climate Fund, and suggested that the funds could be used to purchase the Intellectual Property Rights of climate friendly technologies, which could be provided to developing countries free of charge.

The working group discussed scientific and technical options for the reduction of super-polluting HFC gases, but steered clear of the more politically sensitive discussion of how this could be regulated.

Stern said that the meeting with his counterpart has come at a “propitious moment” – it is around 18 months until a new UN climate deal is scheduled to be signed in Paris – and signalled the willingness of the US to work with India.

“I think that the US and India, who have had a very constructive partnership on these issues in past years, have every basis to look forward to a still more important relationship going forward,” he said.

The US and India have been fractious but necessary partners in the run up to the new agreement, as the second and third largest emitters of carbon dioxide globally. Their ability to cooperate will help determine the ambition of the deal, yet their positions remain far apart.

Whether India adopts new tactics and positions under new PM Modi will be a subject of scrutiny at forthcoming UN climate meetings. Previous comments by Minister Javadekar suggest that the government could take a more active role in the talks.

In a speech prior to the trip, John Kerry reinforced India’s vulnerability to the impacts of climate change, and said that the two countries could develop one of the world’s “defining partnerships” to help combat this and other problems.

“For millions of Indians, extreme weather and resource shortages are not future threats; they are here now,” he said. “They’re endangering their health and prosperity and security every single day.”