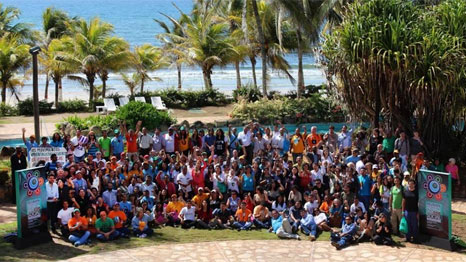 A UN-backed conference in Venezuela has ended with a declaration to scrap carbon markets and reject the green economy.

The Margarita Declaration was issued at the end of a four-day meeting of around 130 green activist groups, which the Venezuelan government hosted in order to raise the volume of civil society demands in UN discussions on climate change.

“The structural causes of climate change are linked to the current capitalist hegemonic system,” the final declaration said. “To combat climate change it is necessary to change the system.”

The declaration will be handed to environment ministers when they meet ahead of the UN’s main round of talks in Lima this year.

The meeting, called the Social Pre-COP, is the first time that civil society has been invited to participate with the UN at this scale at international climate talks.

Groups who participated in the meeting include WWF, CAN International, Third World Network and Christian Aid.

Venezuela said the purpose of the meeting is to “set the basis of an alliance between peoples and governments”.

While it is unclear who signed the declaration, it contrasts with the views of many national governments, which see the transition to a green economy as underpinning efforts to tackle climate change.

The declaration also conflicts with the UN’s own schemes to tackle climate change.

It says carbon markets are a “false solution” to the problem of climate change and brands a UN-backed forest conservation scheme “dangerous and unethical”.

The forests programme, called Reducing Emissions from Deforestation and Land Degradation (REDD), was first introduced into UN proceedings in 2005 at the request of the governments of Papua New Guinea and Costa Rica.

Under this mechanism, rich countries pay developing nations to preserve their forests, removing some of the financial incentive to chop them down.

Deforestation is a significant contributor to climate change as it releases the carbon that is stored in trees.

Similarly, the UN has set up its own carbon market, called the Clean Development Mechanism, which allows developed countries to pay for projects that will reduce the carbon footprint of poor countries.

Maria de Pilar García-Guadilla, a professor at the Simon Bolivar University in Venezuela, said that there was an underlying assumption in the declaration that capitalism was the cause of climate change – a position maintained by the Venezuelan government in its own development plan – but that this was a “fallacy”.

“Venezuela relies heavily on the use of hydrocarbons, or the extractive economies, to support their anti-neoliberal socialist policies. The extractive economy has a severe negative social and environmental impacts in the indigenous communities and in the most biodiverse areas,” she said.

She added that the Margarita Declaration is “very discursive and the real issues are not inside.”

Objections to the concept of a “green economy”, which encourages green growth through carbon markets and clean energy investments, prompted a walkout at the Rio+20 summit in 2012.

Some developing countries are concerned that this model could put them at a commercial disadvantage, and that rich countries should instead focus on how to transfer cash and sustainable technologies to poorer nations.

But the opinions of civil society are more mixed. CAN International, a coalition of green NGOs which was present at the Social Pre-COP, said that REDD is “key to emissions reductions” in the manifesto that it released before the UN’s last climate conference, in Warsaw last year.

One participant at last week’s meeting told RTCC on condition of anonymity that: “In terms of being a neutral observer, [the Venezuelan government] do have their views and they definitely have their ways”.

He added that most of the Venezuelan groups present at the meeting were supportive of the government’s position, in contrast to the 34 Venezuelan NGOs who rejected their invitation to the gathering, due to concerns that it would provide an opportunity for the government to push their socialist agenda.

“That made Venezuela not need to actively push for things, letting the movements propose their views instead,” he said.