Venezuelan NGOs accuse government of hypocrisy on climate change, at a civil society meeting ahead of global talks 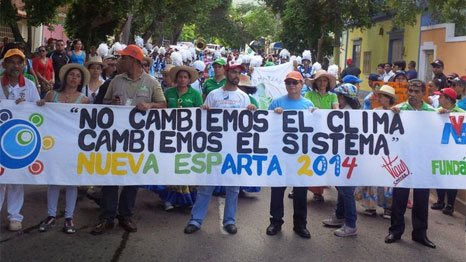 Venezuela’s credibility as the leader of a new social movement on climate action has been questioned by green groups, who say the government has an “inconsistent” record on global warming.

Venezuelan environmentalists made the claims as around 80 international organisations gathered in the country for a landmark, government-hosted discussion on the role of civil society in the UN climate talks.

The coalition of 34 Venezuelan green groups reproached the government for inconsistency in demanding tougher action from rich countries, while failing to implement tough climate policies itself.

They also accused the government of restricting environmental activism in their own country, conflicting with their call for a global social movement on tackling climate change.

“The reality is that, far from promoting the integration of the experiences of Venezuelan environmental groups, there has been repeated action by the national government against NGOs and their projects, often complicating and even preventing their activities,” they wrote in a joint statement.

The four-day “social pre-COP” hosted by Venezuela this week is the first time that a national government has engaged with civil society at this scale.

Working under the slogan of “change the system, not the climate”, the organisers say it is an opportunity to create an alliance between people and governments ahead of the UN’s climate change conference (the COP) in Lima this December.

The decision to host the meeting aligns with Venezuela’s domestic policy on development, in which they pledge to create “a great global movement to stop the causes and repair the effects of climate change that occur as a consequence of the predator capitalist model”.

Tasneem Essop from WWF, who is attending the forum, told RTCC that it was an “important platform” that would allow “civil society across the world to connect with each other, share ideas and build solidarity and unity in our struggle against dangerous climate change”.

But local NGOs, whose relationship with the government soured under former Venezuelan president Hugo Chávez, have expressed concern that the meeting will be complicated by Venezuela’s ideological approach to climate action.

“We consider that a discussion related to global climate change proposed only as a confrontation of socialism versus capitalism, is a simplification of an economic, environmental, social and political situation that is much more complex,” said Alejandro Luy, a member of Red Ara group that released the statement, and which was invited by the government to attend the meeting.

He added that there was a lack of engagement between NGOs and the Ministry of Environment in Venezuela, pointing to a recent decision by the government to evict the Los Roques Scientific Foundation from their research station at one of Venezuela’s national parks after 47 years of work.

“Several cooperation agreements between the Ministry of the Popular Power for the Environment and environmental NGOs have been cancelled with no dialogue,” said Luy.

Venezuela’s record on human rights has been criticized by international groups, including in a 2009 report by the Inter-American Commission on Human Rights, which stated that the “exercising the right of peaceful demonstration in Venezuela frequently leads to violations of the rights to life and humane treatment” from state forces and violent groups. This report was rejected by the Venezuelan government.

So far this year, 43 people have reportedly died in opposition protests against Venezuelan president Nicolas Maduro.

The decision to host the meeting is also complicated by Venezuela’s domestic and international policy positions on climate change, said the Venezuelan green groups in their statement.

While most countries, including in Latin America, have submitted two documents to the UN on their national efforts to combat climate change (Mexico has submitted five), Venezuela has still only submitted one. It has yet to implement a national policy on climate change.

“It is irrational to demand developed countries assume responsibility when the country has just delivered the First National Communication on Climate Change and it is in default with all other obligations established in international conventions and the national legislation,” said the group in its statement.

Meanwhile, Venezuela’s economy remains heavily dependent on oil, which generates around 95% of its export earnings.

This creates an “incongruity” in Venezuela’s position in hosting a social pre-COP, says Janet Redman, director of the Climate Policy Program at the Washington-based Institute for Policy Studies, although not one which is unique to Venezuela: President Obama has also promoted the US natural gas industry while pushing for climate action.

Redman, speaking from the meeting in Venezuela, told RTCC: “I see that incongruity – it’s starker here, and what’s important is that it raises that inconsistency so we have an honest conversation about how we grapple with the transition to a world where there are no development pathways that are based on fossil fuels.”

The inconsistency is largely based on the underlying and long-standing debates within the UN about who should take the blame for global warming, explained Guy Edwards from Brown University’s Climate and Development Lab.

“From the Venezuelan government point of view, the global climate change regime is seen in terms of global injustices and the historical responsibility of developed countries; and one which threatens Venezuela’s national interests due to the centrality of oil.

“Some elements of Venezuelan civil society are against this ideological position and frustrated by the dominance of oil in the Venezuelan economy and the government’s reluctance to take real action on climate change.”

Civil society groups taking part in the social pre-COP will concentrate the outcomes of the meeting in a document in November, which will be presented to ministers ahead of the UN’s climate conference in Lima in December.

Luy stressed that Venezuelan society was willing to work with the government to resolve climate change and supported the concept of greater engagement with civil society.

He said: “We hope that the Social Pre-COP initiative will promote the search for the reunification of our country and the recognition that the solutions to our problems, need the participation and action of all citizens.”

The Venezuelan government had not responded to a request for comment at time of publication.