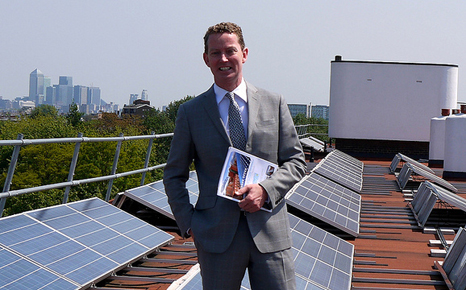 Greg Barker was an advocate for renewable energy within government (Source: DECC)

Prime minister David Cameron is reshuffling key ministers amid warnings the UK could miss its carbon budget, in a test for his government’s green credentials.

In one of the most sweeping reshuffles of recent memory, two champions for action on climate change have left: climate change minister Greg Barker and foreign secretary William Hague.

Former defence secretary Philip Hammond takes over the foreign office brief while backbencher Amber Rudd has been given a junior role in the Department of Energy and Climate Change (Decc).

Environment secretary Owen Paterson, seen as a climate sceptic, is making way for Liz Truss, previously a junior minister in the education department.

The reorganisation of Conservative ministers comes as the Committee on Climate Change (CCC) advised the government it will miss its carbon budget unless it adopts stronger green policies.

At the current rate of progress, the UK will breach its carbon budget from 2013 to 2025, according to the latest assessment from the CCC. It is on track to achieve a 21% to 23% greenhouse gas emissions cut in that period, not the 31% required by law.

The CCC, which was set up to advise the government on complying with its world-leading climate legislation, said the budget can be met at an affordable cost, but further action is needed.

There have been improvements in the fuel efficiency of cars and investment in wind power, the report said. Progress has been “limited” on energy efficiency and development of heatpumps, it added, and “frustratingly slow” on carbon capture and storage.

Lord Deben, chair of the CCC, said: “Climate change demands urgent action. We have started on the road and we are being joined by much of the rest of the world.

“However, despite our success, the UK is still not on track to meet our statutory commitment to cut emissions by 80%. The longer we leave it, the costlier it becomes.

“This report shows the best and most cost effective way to meet our targets. There is no time to lose.”

Philip Hammond has been confirmed as the new foreign secretary. While considered a climate sceptic in the past, Hammond said climate change was “clearly a factor” in flooding that struck the UK earlier this year, and a national security issue.

Hammond is a confirmed Eurosceptic, having said he would vote for the UK to leave the EU, which could affect the UK’s relationship with Europe’s institutions in climate negotiations.

Incoming environment secretary Liz Truss is seen as a rising star in the Conservative Party. She has a mixed voting record on climate change and worked for oil company Shell, joining its graduate scheme out of university.

Truss has spoken in favour of schemes to install solar panels in schools but expressed concerns about solar farms taking over agricultural land.

Matthew Hancock will take over Fallon’s mixed portfolio, which spans energy and business. In 2012, he joined backbench calls for tighter planning restrictions on wind farms, saying: “I support renewable energy but we need to do it in a way that gives the most value for money and that does not destroy our natural environment.”

As a former member of spending watchdog the Public Accounts Committee in 2010, Hancock said there needed to be a consistent plan to tackle climate change.

Amber Rudd was one of Cameron’s “A-list” candidates elected on a slim majority in 2010. She has been appointed parliamentary under secretary of state at Decc, in what appears to be a downgrading of Barker’s post.

Rudd has asked questions about low carbon business and energy efficiency in parliament. Yesterday, she posted a picture of herself endorsing a Greenpeace “coastal champions” campaign.

Barker is leaving government and will step down as an MP at the next election. His exit came as a surprise to many, despite his relatively long tenure of four years in the job, as he is close to the prime minister.

Crikey. Greg Barker quits? Didn’t see that one coming. One of Cameron’s earliest and most loyal supporters

Barker is set to advise Cameron on green issues temporarily before heading into the private sector.

Environmentalists and green business leaders paid tribute to his record of promoting a green agenda within government.

When some decided tackling climate change wasn’t a fashionable cause anymore, @GregBarkerMP didn’t give up. Bad news he’s quitting politics.

Very concerned by who will replace @GregBarkerMP!? He respects climate science & has been a HUGE solar champion, for all the ups & downs.

As foreign secretary, Hague was also instrumental in keeping climate change on the global agenda. He supported a strong carbon budget against opposition from Liberal Democrat cabinet colleague Vince Cable.

Hague was, behind the scenes, a champion of UK role in tackling international climate change. Reshuffle looking worrying for climate issues

There was less sorrow from the environmental sector at Paterson’s departure. Despite leading on adaptation, it emerged last week he had turned down offers of a briefing on climate change by the Met Office. He also came under criticism for staying silent on the link between climate change and flooding earlier this year.

Losing @GregBarkerMP and William Hague makes govt a much less greener place. Owen Paterson, not so much