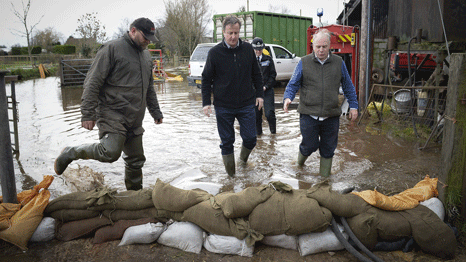 UK floods have opened up a window of opportunity for politicians to act on climate change, but it won’t last forever.

According to two YouGov polls, public opinion on climate change has shifted since storms and floods started to batter the UK three months ago, providing a political space for politicians to take ambitious action to prevent climate change.

But time is short, warns Dr Stuart Capstick, who researches the psychology of climate change at Cardiff University.

The polls, conducted two weeks apart as flooding worsened at the beginning of February, show that public opinion shifted towards more people believing that the floods were caused by climate change than not.

This shift has given politicians a window of opportunity to take some of the “difficult decisions” necessary to decarbonising Britain’s economy, says Will Straw, an associate director at the Institute for Public Policy Research.

The damage caused by severe storms and floods since December, including a collapsed railway line in the southwest and hundreds of houses left underwater outside London and on the Somerset levels, has led to politicians donning their wellies and pledging financial relief to those affected – and adopting a stance on climate change.

Labour leader Ed Miliband warned on the weekend that climate change “threatens national security” while Prime Minister David Cameron says he “very much suspects” that it has caused the storms, and has talked of the need to build a country where the current weather is commonplace.

Defence Secretary Philip Hammond, previously regarded as a climate sceptic, told the BBC climate change was “clearly a factor” in the weather, while Energy Secretary Ed Davey said the floods “proved the case” for a tough UN climate deal.

But is this a sign of a significant trend?

Peter Kellner, president of YouGov, says the shift in public opinion is “clear but still only modest”. It must become larger and more sustained if it is to change the political scene, he writes, although this is something that politicians themselves can influence through how they treat the crisis.

“If the floods are to lead to a significant change in policy towards climate change, a special form of political leadership is needed. It will be vital, but not enough, for Cameron, Miliband and Clegg to think long-term, to work together and to resist temptations to score party points.”

It’s is a crucial time for UK climate change policy.

The country is deeply involved in EU discussions on how fast the region should cut carbon pollution, and also involved in negotiations on a proposed global emissions reduction treaty, set to be signed in Paris next year.

While the UK only releases around 2% of the world’s greenhouse gases annually, it plays an influential role at the UN, and supplies significant levels of funding to poorer countries to help them invest in clean energy.

Many have questioned whether strong words on climate change will translate into long term action to fight the problem.

Those RTCC has spoken to say that the response so far looks only to the short term, rather than recognising the long term threat that climate change poses.

“Some of the politicians’ comments have read rather like blaming the Great Fire of London on the fire brigade,” said Alistair Borthwick, a flooding expert at the University of Edinburgh.

Straw, who will stand as a Labour candidate for Parliament in 2015, agrees, but highlights the difficulty for politicians in communicating the potential threats of global warming: “It’s quite easy for people and politicians to grasp the need to prevent the worst impacts of flooding.”

“Politicians have strong incentives to respond to immediate disasters of one kind of another. What’s much harder is to create the political space and make a public argument for preventing something from happening in the first place.”

He highlighted that Miliband, as an opposition leader, could have “made more” of the current government’s rollback of energy efficiency policies and retreat from attempts to decarbonise the UK’s energy supply by 2030.

He said that Cameron needed to come under more pressure to explain where he stands on climate change and whether he is willing to take the “difficult decisions” that will prevent severe weather events in the future.

Incorporating long term action is likely to be a longer and harder task than announcing £130 million to repair flood defences, as Secretary of State for Communities and Local Government Eric Pickles did last week.

Influential Conservative voices have made it clear that they would fight against a policy shift from adaptation to mitigation.

Last week influential Conservative Party activist Tim Montgomerie tweeted that there was little point in the UK acting to reduce its own emissions before a global deal had been struck by the UN.

Further to last email, no point fighting climate change in absence of global agreement. Scarce resources should go to adaptation/resilience.

The challenge for climate campaigners will be to demonstrate the scientific and economic case to act now, rather than waiting until the end of 2015.

Straw says the door is open, but political courage is needed to step through and sell this message to the electroate.

“With important negotiations coming up in Paris at the end of next year this could also be an opportunity for Britain and the European Union to take the lead on tackling climate change, and doing so in the face of these extreme weather events,” he says.

“It’s critical we use this opportunity at the moment to turn what is undoubtedly a crisis for many people into an opportunity to take this agenda more seriously.”