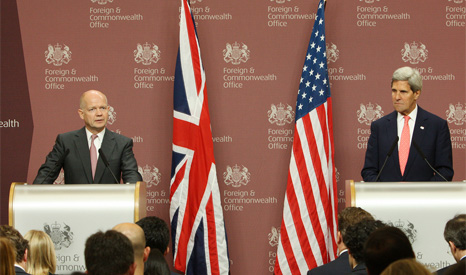 The US Secretary of State and British Foreign Minister released statements to that effect hours after a new study by over 300 scientists warned of increasing climate impacts across the world.

“Unless we act dramatically and quickly, science tells us our climate and our way of life are literally in jeopardy,” said Kerry, adding: “There are those who say we can’t afford to act. But waiting is truly unaffordable. The costs of inaction are catastrophic.”

Hague said warming of 4C above pre-industrial levels would “catastrophic”, calling for “unprecedented global cooperation” to curb carbon pollution levels.  “No country would be left unaffected. Governments everywhere have to act.”

The latest report from the UN’s Intergovernmental Panel on Climate Change (IPCC) said climate change is happening already and that the signs are everywhere, from melting glaciers and sea ice to more frequent wild fires, extreme heat waves and damaged crops.

It warned of ever more dangerous impacts without rapid action to curb carbon emissions, including extreme weather, sea level rise and species extinctions. 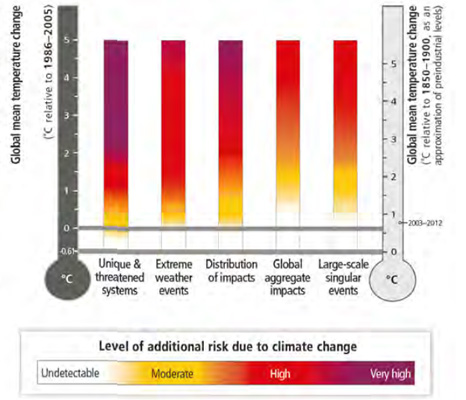 Levels of ‘additional risk’ as a result of climate change (Pic: IPCC WGII)

Nearly 200 countries are currently in negotiations over a global emissions reduction treaty, scheduled to be signed off in Paris next year, and come into effect by 2020.

Those discussions are moving slowly, but world leaders are primed to gather in New York at the end of summer for a summit convened by UN Secretary General Ban Ki-moon to try and accelerate the process.

An IPCC study released last September said the planet was currently on course to warm by at least 2C by the end of the century, and potentially more if emissions continued to rise as fast as they have done over the previous two decades.

UN climate chief Christiana Figueres, who is overseeing international talks, said governments should use this study to “seize the moment and the opportunities for managing climate change risks”.

“The path of tomorrow is undoubtedly determined by our choices today. We must decide which path to follow,” she said.

While the latest IPCC study does highlight the potential for parts of society to adapt to changing weather patterns, it offers a bleak forecast for around 15% of small island states, which could disappear under rising sea levels by the end of the century.

Ambassador Marlene Moses, who represents the Alliance of Small Island States in New York hopes the study will convince previously sceptical or apathetic politicians of the need to act.

“We hope that it helps convince the international community, particularly those most responsible for climate change, to address the crisis with greater urgency and not at some abstract date in the future but immediately,” she said.

Some national governments still appear unconvinced, notably those in Ottawa and Canberra, which are currently hostile to any form of tough climate action.

Speaking earlier today, Australia’s Prime Minister Tony Abbott dismissed the IPCC study, which paints a bleak picture for the Great Barrier Reef and Murray-Darling Basin, and warns of ever-increasing temperatures across the continent.

“Australia is a land of droughts and flooding rains, always has been, always will be,” he told reporters, but said his administration was “committed” to curbing carbon emissions.

Analysts say countries fiercely opposed to a UN deal are increasingly in a minority, although it is still unclear what form next year’s agreement will take, or if it will be enough to avoid warming of beyond 2C, a level deemed as dangerous in 2009.

“We are seeing signs of renewed momentum to address climate change and this should mount in the coming months,” said Andrew Steer from the Washington DC–based World Resources Institute.

“The UN summit and the COP in Lima should raise ambition leading up to a new universal climate agreement in Paris in 2015.”

What politicians will not be armed with are precise numbers detailing how much inaction on climate will cost their countries.

Recent global adaptation costs range from $70-100 billion a year by 2050, but the IPCC report says there is “little confidence in these figures”.

But far from these being too large, it says that for developing countries, the true costs could be “orders of magnitude greater than current investment level.”

Warming of 2C could cause economic damages of 0.2-2% of GDP, the report says, but the authors acknowledge this does not account for other impacts or catastrophes that could be linked with rising temperatures.

For leading climate economist Lord Stern, the signs and costs of climate change after 1C of warming on pre-industrial levels should be enough for governments to take note.

He said: “While people in all countries will need to make themselves more resilient to those impacts that cannot now be avoided over the next few decades, the potential risks from unmitigated climate change towards the end of this century and into the next will be very severe, particularly if global warming exceeds 2 centigrade degrees.”