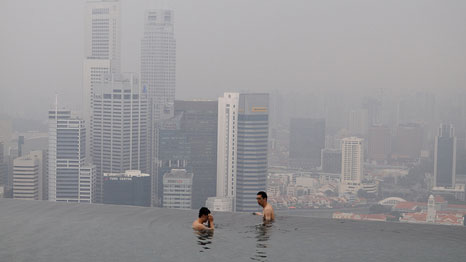 The government in Singapore has proposed fines of up to US$ 1.6million dollars for companies that cause the air pollution crossing over the border from Indonesia.

Draft legislation read in Parliament yesterday addressed the problem of toxic haze drifting from fires caused by forest clearance in Indonesia into other South-East Asian countries.

Last year, pollution levels in Singapore reached record levels as forest fires raged across Indonesia to make way for plantations, for which palm oil and paper companies have been blamed.

The Transboundary Haze Pollution Bill seeks to address this problem by slapping fines on companies and landowners responsible for the burning.

The Bill was introduced to Parliament following a month-long public consultation that resulted in a tightening of penalties.

The government initially proposed that companies were fined up to S$ 300,000 if they had caused or contributed to the haze, and up to S$450,000 if they deliberately ignored requests to tackle the problem.

Under the new proposed rules, a firm can be fined up to S$ 100,000 for each day of haze, along with an additional S$ 50,000 each day if they fail to comply with preventative measures. The fines are capped at S$ 2million, or around US$ 1.6million.

Balakrishnan reinforced that the Bill cannot tackle the problem alone, and that proving which companies are responsible would require collaboration across all the South-East Asian nations (ASEAN).

“This is an ASEAN problem. We need effective collaboration, cooperation between governments. We need to share information, we need to share results of investigations,” he said.

In 2002, all ASEAN nations signed a legally binding environmental agreement on transboundary haze, but Indonesia has yet to ratify the deal.

Experts say that failure in Jakarta to act on the problem, combined with dry conditions of a likely El Niño, means that this year’s haze could be worse than in 2013.

“It is time to take a tough stand with culpable corporations who have little regard for the damage caused to the well-being of the people, environment and the rich biodiversity including endangered species,” said Elaine Tan, CEO of WWF-Singapore.