Severe smog in Singapore is the fault of the Indonesian government’s failure to enforce forest protection laws, according to Greenpeace South Asia.

Fires lit to clear forest for agricultural use in Indonesia have sent huge plumes of smoke drifting east to Singapore and Malaysia. Observers warn that much of the Sumatra rainforest could be eradicated in the next two decades, as palm oil plantations and paper factories expand operations.

Pollution levels have hit record levels and governments have been exchanging blame between each other and the companies behind the clearances. In May 2010 Indonesia signed a deal agreeing to protect 65 million hectares of virgin forest from developers.

“We found 50% of the fires to be inside the moratorium area, mostly in the peatlands,” said Yuyun Indradi, a forest campaigner with Greenpeace South Asia based in Jakarta. “In the moratorium area it is clearly the government’s responsibility to protect the forest. This is industrial scale burning. It is easy to find out who is behind it.” 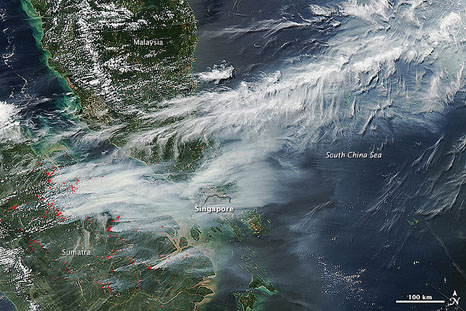 Smoke from fires in Indonesia drifting east to Singapore and Malaysia on June 19 (Source: Flickr/NASA Goddard)

As part of the $1bn protection deal with the government of Norway, Indonesia established a monitored forest area and started work to establish rules and procedures to reduce greenhouse gas emissions from deforestation.

“This is about weak law enforcement that the government applies to its zero burning policy. There is a problem with corruption, the two issues are linked. These weaknesses allow the continuing of bad practices.”

The Prime Minister of Singapore Lee Hsien Loong blamed the companies carrying out the burning.

“We know the source of the problem – illegal burning by errant companies in Sumatra. We are actively engaging the Indonesian government to solve the problem. Singapore has provided satellite hotspot data and imagery to the Indonesian authorities to help them to identify the companies which are responsible.

“Some Indonesian officials have suggested that these errant companies may be linked to Singapore and Malaysia.We have requested them to provide us any evidence they may have on this.”

Indradi puts little value on the tit for tat exchange which deflects from the root cause of the fires.

“This is not healthy for Indonesia’s diplomatic relationship with Singapore and Malaysia. This kind of debate and argument on both sides is not necessary because it is quite clear who is responsible,” he added.

“It is still the responsibility of the government to carry out law enforcement and the companies are responsible to comply. It’s quite simple.”

With violations for fire clearances punished lightly, there is little incentive for companies to stay within the rules and many are serial offenders, according to Indradi.

Rainforests store more than 220 billion tonnes of carbon with almost 10% of that in Indonesia. Deforestation is responsible for 20% of global greenhouse gas emissions.

80% of Indonesia’s greenhouse gas emissions are from deforestation, largely motivated by forest clearance for palm oil plantations and other industrial and agricultural activity.

A campaign by Greenpeace targeting Asia Pulp & Paper (APP), which is responsible for clearing carbon-rich natural forest to make way for plantations, resulted in the company agreeing to end its part in deforestation.

President Susilo Bambang Yudhoyono has promised to reduce emissions by 41% but Indradi believes stronger enforcement of forest protection will be needed if the country is to hit its climate targets.

“Our president came up with the commitment to reduce our emissions by 41% but what we see now is that there are no serious measures in place to deal with these issues,” he said.

“If it is only about trying to impress the international community with such a commitment without any serious concrete implementation, the world will see this is just nonsense.”