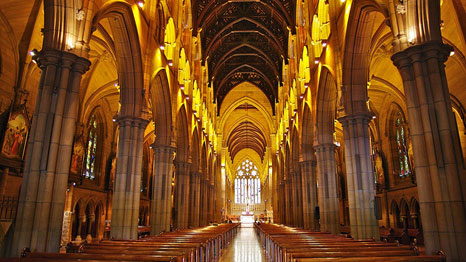 The Anglican Church of Australia has passed a motion at its General Synod encouraging churches across the country to divest from fossil fuels.

The recommendation was passed alongside another motion scalding the Australian government for “denigrating” climate science.

The decisions show a growing disapproval of Tony Abbott’s approach towards climate change, which has seen him abolish the Climate Commission and push for a repeal of the carbon tax.

In her motion, Dr Beth Heyde, chairwoman of the church’s Public Affairs Commission, said that it made financial sense to give up shares in the fossil fuel industry, which is responsible for most global warming.

“The market can be expected to recognise that investments in fossil fuels are becoming very risky. They may well become ‘stranded assets’, whose value rapidly decreases as buyers no longer want them,” Dr Heyde said.

The general synod is the governing body of the Anglican Church in Australia, and includes bishops, lay and clergy representatives from all 23 dioceses in the country.

Several dioceses across Australia are now looking into the possibility of divesting, Bishop Tom Wilmot told RTCC, including his own in Perth.

Wilmot told the General Synod that the Abbott government was not interested “in the inconvenient truths of climate change”.

He accused them of “denigrating” science in general, and conducting a “phony” review conducted by climate sceptic Dick Warburton into Australia’s renewable energy target.

“It’s very concerning to people that the government seems not only to be favouring fossil fuels, but to be deconstructing anything to do with the green side of things,” said Wilmot.

“The church can bring a moral voice to the debate, but from a theological point of view, God is the creator and so what we do with the creation does matter, not just to humans but to the non-human part of creation as well.”

The government is expected to repeal the country’s carbon tax next week when the new senate takes their seats.

Abbott says he wants to replace it with a “direct action plan” to reduce emissions, though analysis shows that this would require an extra $4 billion in funding if the government is to achieve its pledge to reduce emissions 5% by 2020 compared to 2000 levels.

The church noted in addition that this target is far short of the levels of emissions reductions required by climate change, and leaves it behind other developed nations. The EU, for instance, has agreed a target of a 20% reduction by 2020 on 1990 levels – a target which it is set to overachieve by 4.5%.

In other parts of the world, the church has been vocal on the subject of divestment. In the UK, the Quakers have agreed to give up their fossil fuel assets, while a Catholic university in the US is the largest endowment fund so far to completely divest from coal, oil and gas.

But the Methodist Church in the UK, which has investments in the fossil fuel industry worth £58 million, yesterday said that it would not divest, despite pressure from local churches.

At the launch of its report “Fossil Fuels and the Future” it instead said that it would conduct a review of investment policy, and report back in 2015.

Archbishop Desmond Tutu has called for an “apartheid-style boycott” of the industry.