Australia emissions could rise by 9% if Tony Abbott is elected 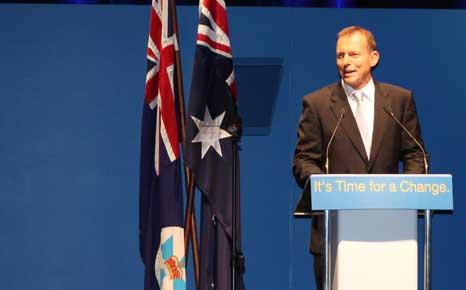 Australia’s greenhouse gas emissions are likely to soar if Tony Abbott is elected as Prime Minister on Saturday, the Sydney-based Climate Institute warns.

Under current government policies, it says Australia could achieve a 25% reduction of carbon emissions on 2000 levels by 2020, but opposition leader Tony Abbott’s climate laws would lead to an increase of 9% by 2020.

Both the incumbent Labor party and challenging Coalition have committed to cut Australia’s emissions 5% by 2020, but two studies have found Abbott’s ‘Direct Action plan’ is likely to be several billion dollars underfunded.

It will spend a maximum of $3.2 billion on projects to cut emissions, which it hopes will deliver the required cuts.

But as Australians head to the polls this weekend, concern is growing on what effect the Coalition’s proposed A$2 billion cuts to green policies could have on the country’s climate target.

Climate Institute models have concluded that if elected, Tony Abbott’s Coalition could see emissions rise by as much as 45% by 2050. This would require an additional A$4 billion additional funding to achieve the 5% 2020 emissions targets.

Abbot has promised to continue to support the agreed global goal of avoiding a 2°C increase in global temperatures. He has also said he supports keeping the Renewable Energy Target but will review it in 2014.

The Climate Institute says domestic and international experiences of cutting green policies indicate the mechanisms proposed by the Coalition have not achieved absolute emissions reductions to date.

And according to environmental advocates Environment Victoria, if the Coalition scraps the carbon price, in just four years taxpayers will be A$7.5 billion worse off.

The Institute also warns that with Australia having just experienced its hottest 12 month period on record and with the consequences of climate change becoming ever more severe, neither party is taking the issue seriously enough.

“Apart from a welcome $9 million for the National Adaptation Research Facility from the Coalition, there is still a gaping hole from both major parties when it comes to preparing Australians for the unavoidable costs of climate change,” Connor said.

“The costs for food, insurance premiums, emergency services and other essentials will continue to rise with the growing intensity of bushfires, floods, and other climate impacts if Australia doesn’t do more to protect its national climate interest in avoiding 2 degrees warming above pre-industrial levels.”