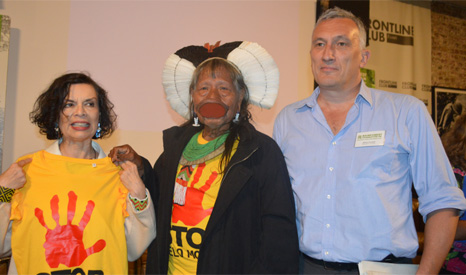 Tribal chiefs have accused the Brazilian government of threatening their rights by allowing development projects to go ahead in the Amazon rainforest.

Faced with soaring demand for electricity, the Brazilian government has given its tacit approval to 30 planned hydropower projects in the heart of the Amazon.

Some, like the 11,000-megawatt Belo Monte dam, will flood 500 square kilometres of rainforest.

Human rights and environmental groups say it will displace more than 20,000 indigenous peoples living in the region and devastate the biodiversity of the Amazon rainforest.

At a press conference in London, Chief Raoni Metuktire of the Kayapó tribe from the Xingu River region in the Amazon, and his nephew, Chief Megaron Txucarramãe, spoke out against President Dilma Rousseff, who is running for re-election in October.

“All around our territories, the forest is being cut down,” said Raoni. “There’s only a bit of forest left and that’s in our [territories]. 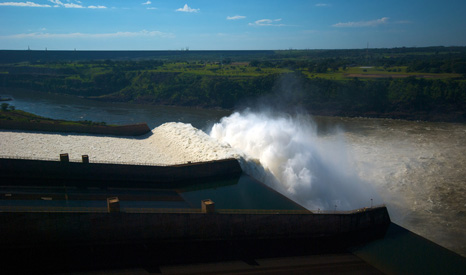 The Itaipu Dam is Brazil’s largest, supplying 19% of electricity consumed in the country (Pic: Kevin Jones/Flickr)

Campaigners say the Belo Monte dam, along with logging, mining and ranching activities, is threatening the Xingu’s indigenous peoples and dozens of endemic freshwater species that live in the river.

“The river is polluted with toxins from agribusinesses and is flowing into the river right up to indigenous territories,” Megaron said.

“Even the fish are contaminated. If we drink the water it’s not good for us. I don’t want to be ill.”

A 100km stretch of the Xingu known as the Volta Grande (Big Bend), where the Belo Monte dam will be constructed, is home to approximately 25,000 indigenous peoples including the Juruna, Xikrín, Arara, Xipaia, Kuruaya, Parakanã, Araweté and the Kayapó tribes.

But despite continuing protests by the Kayapò, among other Amazonian tribes, construction of the world’s third largest hydroelectric dam is underway.

Human rights activist Bianca Jagger, also at the press event, expressed her concern over the lack of consultations from the Brazilian government.

“It is a grave human rights violation and an environmental crime. The river system that provides one fifth of the world’s fresh water will be polluted.”

Energy consumption in Brazil has increased by more than one third in the past decade because of sustained economic growth, according to data from the US Energy Information Agency.

Hydropower accounts for 80% of the country’s electricity supply, with wind, biomass and gas providing the rest.

Analysts say it needs to add 6,000MW each year by 2020 to its current generating capacity of 121,000MW if it wants to keep the economy growing, and drag millions of its citizens out of poverty.

So far, the government appears to be banking on hydropower to achieve that goal. Brazil has the third largest hydro potential after China and Russia, but this bounty brings problems.

Despite the Brazilian government’s approval of the $13 billion dam, which is expected to be completed in 2016, the country has been experiencing a period of drought, presenting a challenge for its hydropower capabilities.

It brings painful memories of the apagão or ‘big blackout’ of 2001-02, when  an exceptionally dry season meant electricity had to be rationed as reservoirs ran dry.

“Brazil is currently experiencing its worst drought in 40 years which has contributed to electricity blackouts in many Brazilian regions,” said the US Department of Energy last week warning its reliance on the Amazon River basin presents ‘electricity reliability challenges’.

Patrick Cunningham from the NGO Tribes Alive, asks why Brazil has not chosen to exploit its huge solar and wind energy resources instead of banking on hydro.

“At the time Belo Monte was being pushed, a study found that Brazil could use [other] sources of renewable energy and make improvements to the energy efficiency of their current systems instead,” he said.

“For half the cost of Belo Monte they could secure the energy security of Brazil. But the Brazilian government didn’t care [and] it has carried on.”

In order to protect their communities, the Kayapó tribe are demanding areas surrounding their territories be demarcated.

Although the Brazilian government has recognised 690 areas as indigenous territories to date, the country’s indigenous peoples only occupy 1.5% of this land as loggers, miners and ranchers, often illegally, have settled in these areas as well.

Raoni, who has been campaigning to demarcate his tribe’s ancestral lands since the 1980s, successfully achieved the high-profile demarcation of the Menkragnoti Reserve in 1992 after British musician Sting joined his cause and set up the Rainforest Foundation to support the rights of indigenous peoples. 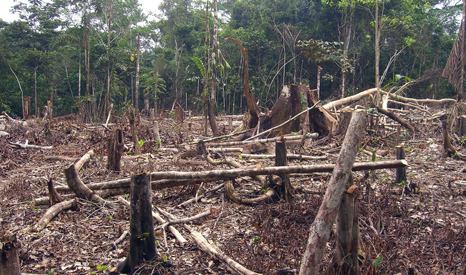 “It’s been a long time that I’ve been fighting for the rights of indigenous peoples,” Raoni said. “[But] we forgot a very important piece of land that runs along the Xingu River. The Kapôt-Nhinore. It’s the traditional land of the Kayapó and it hasn’t been demarcated yet.

“We [have] now started a campaign to demarcate the land but we’re still waiting.”

Human rights and environmental groups say a recent set of proposed legal and constitutional reforms by the Brazilian government are likely to make their situation worse.

These include Proposed Law 227 (PLP 227/2012) and Proposed Constitutional Amendment 215 (PEC 215), which will weaken the right of indigenous peoples to the exclusive use of their ancestral lands by allowing the government to reverse previously recognised demarcated areas and prevent the demarcation of new territories.

“[The Brazilian government] will use PEC 215 to diminish the land of the Kayapó. They’re trying to change the constitution,” Megaron said.

“Protecting the rights of indigenous peoples is essential for the survival of the planet,” added Ms Jagger. “I appeal to the Brazilian government to affirm the Kayapó’s right to their sacred land in Kapôt-Nhinore which is enshrined in the 1988 constitution. If these proposals are allowed to go ahead, hundreds of tribal cultures may disappear.”

An influential landowners bloc in the Brazilian Congress known as the Ruralista are thought to be the main advocates for the proposed legal and constitutional reform.

Ms Jagger said: “In the past, Brazil has had an average of 30 demarcations per year. But under President Rousseff this has shrunk to just 3 per year [because] the Brazilian Congress today is dominated by a large landowners lobby.”

To gather support for their campaign, Raoni and Megaron have shared their struggle with Europe’s royalty including Prince Albert of Monaco, Britain’s Prince Charles and King Harald of Norway.

There is also someone else they would like to meet, although given their woeful performance at the tournament this now appears unlikely: the England football team.

“It would be good if [the] players could come to our villages and see how beautiful it is and the problems surrounding us,” Megaron said. “It would be great if at least one player could come and visit our tribe, as they are, in the forest.”

Raoni and Megaron joined up to 1500 people in May to protest in the Brazilian capital of Brasília over the $15 billion cost of the World Cup.

“With that amount you could address many of the social problems that you have in Brazil,” said Megaron.

“That is the reason that there is tremendous unrest in the country and why it has galvanized people to protest about different issues. The World Cup in South Africa cost $1 billion. That’s an enormous difference. The people of Brazil believe this money could have been used better.”

The Amazon is home to 1.4 billion acres of dense forest which acts as a carbon sink, soaking up carbon dioxide from the atmosphere and helping to stabilise local and global climate change. 240 tribes, totalling approximately 900,000 people, also reside in the rainforest.

But a number of factors have caused some tribes to reduce in size to fewer than the number of players in a football team. This includes the Akuntsu, Juma and Piripkura tribes, the Indians of the Tapirapé River and ‘The Last of his Tribe’ or ‘The Man in the Hole’.

Raoni said: “It’s been quite a while since I’ve been fighting for the forests and my people and I’m getting tired. If you can help, we can protect my land and people.”