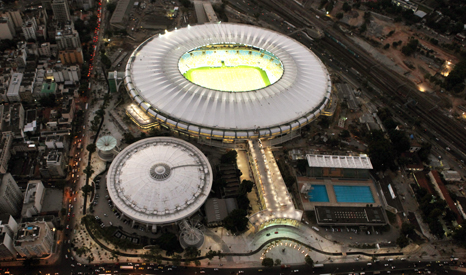 A few days before the first ball starts rolling at the 2014 FIFA World Cup, organisers Brazil have announced the offset of its greenhouse gas emissions.

Around US$ 1.5 billion is being set aside to adress the climate impacts of the world’s largest mass spectator event. The projection estimates an amount of 1.4 million tonnes of CO2 during the tournament, which runs from June 12 – July 13.

According to Carlos Klink, Brazilian Climate Change Secretary at the Ministry of Environment, the country has been undergoing a sustainable agenda for over the past three years and is leading a special mechanism to compensate carbon emissions in big events.

“There was no methodolgy for big events so far. We studied the best practices in the IPCC (Intergovernmental Panel on Climate Change) methodology and decided to create our own methodology with international expertise and making it in a participatory way”, stated Klink to RTCC.

The biggest challenge was to create a brand new mechanism to compensate all the emissions before the World Cup kicks off. Brazil wants to be a pioneer in the field of offsetting CO2, said Klink. The direct emissions are an estimated 60,000 tonnes of carbon.

The equivalent to 520,000 tonnes of carbon credits have already been donated to the country by 11 different companies from agribusiness sector, as well as civil engineering building and steel enterprises. 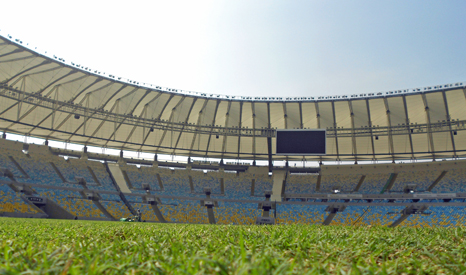 Last April, Brazilian authorities launched a low carbon initiative making a call for proposals for companies willing to participate in the process of compensating the World Cup CO2 emissions by contributing with Certified Emission Reductions (CER) from projects able to neutralize greenhouse effect gases. This public appeal ends in July.

This program has received the recognition from the UN Framework Convention on Climate Change (UNFCCC) as part of a global trend by organizers to green big sporting events. It encourages holders of carbon credits from the UN’s Clean Development Mechanism (CDM) to donate, offseting emissions from construction and renovation of stadiums, consumption of fossil fuels from official and public transport, and other sources.

The CDM allows emission-reduction projects in developing countries to earn certified emission reductions equivalent to one tonne of CO2. Those certificates may be traded and sold in order to help industrialized countries to meet a part of their emission reduction targets under the Kyoto Protocol. Brazil is part of the 105 developing countries list registered aiming to deliver finance for emission-reduction projects.

Klink says Brazil has already been contacted by other governments to understand how this process works, and if they can copy the process for other events.

“We got much more than we needed and are really pleased for that. It’s a huge achievement because the whole methodology is transparent with the best practices worldwide. We hope this can be used as a model for big events as well as the Olympic Games”, he said. 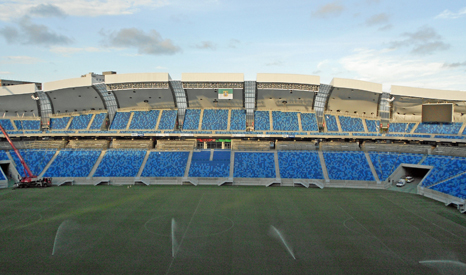 The Arena das Dunas in the city of Natal, Rio Grande, can be irrigated using recycled rainwater, collected from the roof

It is likely to be the first time that 100% of the direct emissions from the World Cup are mitigated, and all of the stadiums  environmentally certified, a requirement FIFA may adopt in the future.

Surfing on this trend, FIFA has also estimated its carbon footprint of this largest single-sport event in the world. The period of preparations recorded 38,048 tonnes of CO2, but the total amount of the event regarding FIFA operations and matches could be around 2.7 million of tonnes of CO2.

Green business in Brazil could also benefit from this new focus on efficiency.

Certified stadiums, incentives for sustainable consumption, production and the recycling of solid waste are some ‘actions’ that are being sold in a massive green propaganda push throughout the Brazilian media.

For Claudio Langone who coordinates the Sustainability Agenda from the Ministry of Sports, the greatest challenge was to build a green agenda that could beat the World Cups in South Africa (2010) and Germany (2006).

“We’re not working focused only on mitigating environmental impacts. There used to be a common sense that the environmental licensing could be an obstacle for the World Cup projects specially the ones regarding infrastructure and mobility,” he told RTCC.

“We faced the challenge of building up a sustainable agenda for the whole 12 cities that will host football matches, each one with a different background.”

As a condition to receive financing for the arenas, the country’s state-owned development bank (BNDES) established a requirement that all stadiums had to attain the LEED certificate (Leadership in Energy & Environmental Design) granted by the US Green Building Council, and recognised by more than 130 countries.

This shall be the first ever World Cup to have all the football arenas with the green certification either by reusing water or energy efficiency as well as recycled materials. Two out of 12 arenas (Salvador and Fortaleza) are already certified, other six one are undergoing the certification process with the expectation of obtaining the LEED seal before the event starts next week.

And the rest of the arenas located in Porto Alegre, Natal, Cuiabá and São Paulo shall get it by the end of the year due to delays in the reforms. “All stadiums are reducing in at least one third the emissions.” Langone said.

The iconic Maracanã stadium in Rio de Janeiro, where the final takes place on 13 July, has been completely renovated and boasts of being a “sustainable temple”. Built for the 1950 World Cup the arena has a capacity of 78,000 people and has being showing off its water saving and rainwater storage systems to local media.

The refurbishment includes the installation of 2,500 square meters of photovoltaic panels on the surface covering the terraces generating 400,000 kW/h every year enough only to supply 3% of the stadium’s power requirements. 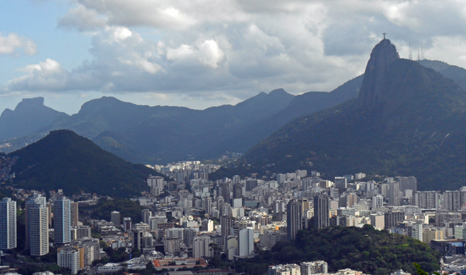 Despite its stunning beaches and views, Rio, like many of Brazil’s cities, faces tough economic and social problems (Pic: Fabiola Ortiz)

But not everyone is convinced by Brazil’s new green drive.

The economist consultant for the World Bank and Inter-American Development Bank (IDB) and member of the Brazilian Network of Environmental Information (REBIA) Luiz Prado says is very skeptical about the whole set of green marketing policies that is being announced.

“The stadiums are equipped with the minimum capacity of capture and water reuse. We’re in the absurd situation of growing the grass pitch with artificial lightning despite being in a tropical country. This artificial light costs at least US$ 45,000 every month. We don’t have any sustainable stadiums at all”, he said.

Prado argues that he finds it difficult to discover a trace of sustainability in the whole event. In Rio de Janeiro, for example, his great concern is regarding transportation due to the reason there will be over 800,000 tourists visiting the city.

The mobility package for this famous Brazilian city has prioritized Bus Rapid Transit (BRTs) corridors as a way of improving urban circulation.

The most recent BRT launched was Transcarioca in 4 June and the far most expensive project spent for the whole World Cup preparations. This BRT with 39 km of extension connecting international airport to satellite sites had an initial estimated cost of US$ 710 million, but had its budget increased by nearly US$ 1 billion.

“You don’t reach the ariport by subway, if you arrive from an international flight with your luggage and take a bus that will go through 27 neighbourhoods (47 stations) to the final stop which is a bus terminal, you still won’t be able to reach where you need to, the hotels in the coastal area of the city”, he said.

According to Prado, lack of transparency was the biggest mistake committed while planning.

“The authorities did not calculate the real costs. No alternative has never being presented to the society,” he added.

The push for a ‘green’ World Cup comes at a critical time for the country, which on Monday had its estimates for 2014 economic growth cut from 1.50% to 1.44%.

The government is battling deep social inequality issues in many of its big cities, and trying to balance development while protecting the environment.

A recent paper in the journal Science argued that since 2004, farmers spared over 86,000 square kilometers of rainforests, close to 14.3 million soccer fields, from clear-cutting.

But the scientists warn that as global demand for soy and beef starts to increase, the government will need to explore new measures to protect the Amazon.